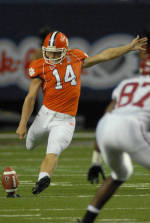 Two-sport athletes leave us with double the excitement. Mark Buchholz has not only played two sports at Clemson, but he played both soccer and football in the same season last year. His presence on both the soccer field and gridiron left Tiger fans in awe at his physical and mental strength to accomplish such a feat.

Buchholz was raised in Stone Mountain, GA but eventually moved just down the road to Alpharetta, GA. He grew up with his two older brothers and younger sister. He was known for his athletic abilities at an early age.

“I can remember always enjoying every sport I tried when I was younger,” he recalled.

Buchholz became very involved with sports, especially soccer, at a young age. “When I was nine, I traveled to a lot of soccer tournaments. I loved the experience of going to the beach every weekend and playing soccer, and I decided to stay with the sport and excel in it.”

His youth soccer team proved to be a very prominent team in the southeast region. The team never lost a game in the state of Georgia. Buchholz’s team won seven straight state championships along with four Southeast region titles.

“It was quite an accomplishment for my team because we were the only U.S. youth soccer team to achieve this,” stated Buchholz.

Along with these revered accomplishments, he has two national soccer titles under his belt. He also earned the opportunity to play some of the best players in the world when he competed against prominent club teams in England.

When Buchholz was only 15, his mother passed away from cancer. “It was a hard time to go through,” said Buchholz. “I had to help raise my sister, so I had to mature earlier than most at that age. I used athletics to get away and clear my head. It was my form of release.”

Through the trials and tribulations that occurred, Buchholz withstood emotional strains to keep a positive, upbeat persona. He is always the guy on the field with a smile on his face and proactive attitude at all times.

Growing up, he experienced many different types of sports. However, he excelled the most in soccer. He was a force on the pitch, but he soon would become a force on the gridiron as well.

During his successful soccer career, football did not cross his mind until the eighth grade. “In the eighth grade, football coaches and friends wanted me to kick for the varsity football team at Chattahoochee High School. However, I didn’t like kicking the ball for a short period of time and then sitting for hours until the end of practice. I felt that I could be training for soccer during that time instead of sitting around.”

Chattahoochee High was one of the premier teams in the state of Georgia. Former Tiger Charlie Whitehurst and current wideout Nelson Faerber also came to Clemson from that school.

Even though Buchholz declined the offer in eighth grade, coaches still tried to coax him to join throughout high school. Finally, he relented and decided to give it a try during his junior year. The starting placekicker was removed from the team at the time when Chattahoochee High was ranked #3 in the state. Someone had to replace the placekicker, and Buchholz was the man for the job.

“When that happened, all of my friends who were playing football begged me to join the team,” he explained. “I finally agreed only because I was allowed to come to practice and kick on special teams and then leave to train for soccer.

“I joined on a Wednesday and started to kick with a helmet and pads on Thursday,” continued Buchholz, who played for Head Coach Bill Waters. “On Friday, our team played Roswell High School, who was ranked #7 in the state. My very first play consisted of kicking to Josh Allen, who received a scholarship to Vanderbilt. The opening kickoff was a bit nerve-racking, but I put it into the endzone.”

Soccer and football are very different sports. However, Buchholz excelled in both by taking different approaches to his overall kicking technique.

“Kicking a soccer ball is different than kicking a football, because I have to try to stay down more and drive it to the goal, while I have to drive a football up and through to get distance.”

Along with football and soccer, Buchholz played many other sports as a youth. He was a standout baseball player and was recruited to play on many travel teams in his area. He also played basketball as a freshman, playing on a team that finished in the top five in the state every season.

Buchholz excelled in tennis in middle school, beating the #2-ranked player in the state at that time. He is also an outstanding golfer and routinely shoots in the low 70s at The Walker Course on the Clemson campus. One of his good friends is Tiger All-America golfer Kyle Stanley.

These experiences playing multiple sports helped him become the mature and composed dual-sport collegiate athlete he is today.

A natural athlete, Buchholz’s next step was to play for a Division I university. A highly-recruited soccer player, Buchholz had offers to play at Clemson, Duke, and Virginia during his sophomore year in high school.

“I committed to play soccer for Clemson with my best friend Ryan Roushandel (who later transferred to Central Florida),” recalled Buchholz.

Along with soccer offers, Buchholz also started to receive football offers. “I almost signed with Vanderbilt to be its placekicker. However, Clemson offered me the opportunity to do both. Clemson was also closer to home, which also helped in my decision to stay with the Tigers.

“My freshman year at Clemson was a lot of fun. I started every game that year. I was so busy focusing on soccer that I never had time to get homesick.”

Buchholz had an outstanding soccer career under Clemson Head Coach Trevor Adair. He was a member of the 2005 Final Four team. He also started for Clemson’s “Sweet 16” team in 2006.

In his career, he played a total of 61 games, including 59 as a starter. He scored 10 goals, three of which were game-winners, and added nine assists from his midfield position. His determination and perseverance on the soccer field soon became known on the gridiron.

“During my freshman year, I kicked at football camp to show the coaches what I could do and I was asked back to every football camp and spring practice,” explained Buchholz. “I eventually won the starting job last season.”

In the 2007 Spring Game, Buchholz went 3-4 on field goals, impressing Head Coach Tommy Bowden enough that he named him the starter. A starting midfielder on the Tiger soccer team and starting placekicker on the Clemson football team left both Adair and Bowden depending on the stamina of Buchholz to help both programs.

While he might not have had time to think about pressure, he did make time to focus on his studies. He made the All-ACC Academic team in both football and soccer, the first Tiger to earn that honor in two different sports in the same semester.

Buchholz’s relaxed persona helped him deal with the demanding schedule of both football and soccer. Few athletes can handle the situation that Buchholz was in last season. Only two other student-athletes in Clemson history, Donald Igwebuike (1982) and Obed Ariri (1977-79), played both sports at the same time.

The demands on Buchholz’s schedule were significant. Doubts came after the 13-3 loss at Georgia Tech last September when Buchholz missed four field goals. Those doubts were erased when he delivered the game-winning 35-yard field goal that gave the Tigers a thrilling 23-21 victory over rival South Carolina at Williams-Brice Stadium.

“That moment was unbelievable,” Buchholz smiled. “Before the kick, I was hoping the offense would get in range. I warmed up and tried my best. I don’t let the pressure get to me, I just try to make the best out of those situations, and I’m so happy that it went in.

“That has been by far my most memorable kicking experience at Clemson. It feels great when you can help your team win a game down the stretch, especially against the Gamecocks.”

Buchholz finished the season with 114 points, a Clemson single-season record. He also broke the Tiger kick-scoring record of 107 points held by Chris Gardocki (1989). Gardocki was a native of the Atlanta area (Stone Mountain) as well. Buchholz ended the season with 22 field goals made in 36 attempts and was a perfect 48-48 on extra points, the most extra points in a season in school history.

This season, the Lou Groza Award Watch List member is only donning football gear after exhausting his soccer eligibility. He had the choice to turn professional in soccer, but he decided to play one more year of football at Clemson.

“It feels good to play just one sport and really enjoy my time with my teammates,” admitted #14. “I feel more a part of the team dynamic this year. I’ve had more time to focus on my placekicking weaknesses to become a more proficient kicker coming into the season.”

Entering the 2008 season, the Tigers were ranked #9 in the Associated Press poll, meaning the pressure to win an ACC Championship and earn a bid into a BCS game have only increased for the Tiger football team.

“Last season, I wish I could have done a little better making long-range kicks,” he said. “That is one of my focuses for improvement this season. I have the leg strength for long kicks, so now I’m focusing on my accuracy this fall and getting the ball through the uprights.

“As a team, I believe we will be solid on the offensive and defensive front. We have all the pieces to get over the hump and win an ACC title. We need to especially be proficient in our special teams to have a successful season as well.”

Buchholz, who has already earned his degree in marketing, would like to play in the NFL or with a professional soccer team after his time is up at Clemson. He also would like to pursue a coaching career in any one of several sports.

Buchholz has been a four-year starter on the soccer field and record-setting kicker on the gridiron. With his success in both along with a November, 2007 boot that Tiger fans will not soon forget, he will go down as one of Clemson’s best-ever dual-sport athletes.

Brittney Earle, a junior from Easley, SC, is a student assistant in the Clemson Sports Information Office.