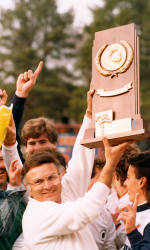 The late Dr. I.M. Ibrahim is known as the “Father of Clemson Soccer” and in many ways the father of soccer in the South, because it was his hard work that made Clemson a soccer power and forced other ACC and area teams to compete. His record includes leading the Tigers to national titles in 1984 and 1987, as he remains the only coach in any sport in Clemson history to win two national titles. For his accomplishments, the soccer facility will be renamed Historic Riggs Field at Ibrahim Stadium.

He took Clemson to the NCAA Tournament 17 times in his 28 seasons, including six times to the Final Four. He led the program to 11 ACC titles, tied for the most by a coach in any sport in Clemson history.

Born in Haifa, Israel, he entered the U.S. in 1960 and attended Shorter College in Rome, GA. In his last two years, he played and served as coach of the soccer program. After graduating in 1964, he moved to Clemson, where he earned his master’s degree and Ph.D in chemistry.

Ibrahim passed away in 2008 at the age of 67, an ironic age for him, because he started the Clemson soccer program in 1967.

That year, he approached then Assistant Athletic Director Bill McLellan about forming a varsity soccer program. McLellan thought the idea was sound and asked Athletic Director Frank Howard to start the program with Ibrahim as head coach.

“Coach Ibrahim was a true American success story in every sense of the word,” stated McLellan. “He came from another country and achieved success at the highest levels, both as a soccer coach and businessman.

“Coach Ibrahim started the soccer program from scratch and led it to national prominence very quickly. The two national titles and numerous ACC Championships are a legacy that will never be forgotten. I was proud to have known him as a person, a coach, and a friend.”

Ibrahim had Clemson in the national top 20 by his sixth year and the Tigers won the ACC Championship in 1972 with a 13-1-1 record. By 1975, just the ninth year in the program’s history, he had Clemson ranked on top of the national polls. He would bring Clemson to a #1 national ranking at some point in nine different seasons in his Tiger career.

Between 1972 and 1979, Clemson won eight consecutive ACC Championships, the longest run of ACC titles in any sport in school history. During that time, Clemson did not lose a single league match and posted a 38-0-2 record. Overall, the streak reached 42 consecutive matches without a loss in league play.

Ibrahim finished his career with an overall record of a 388-102-31 in his 28 seasons. His 77.4 winning percentage is second-best in Tiger history in any sport (among coaches who have served at least four years) since Clemson joined the ACC in 1953. He had a 32-16 record in NCAA Tournament competition, as the 66.7 winning percentage is in the top 10 in NCAA history.

His 388 wins are second-most in ACC history and his 77.4 winning percentage is also second-best. He took Clemson to a final top-20 ranking 19 times, a record that stood among all Clemson coaches until 2008, when Larry Penley took the Tiger golf program to a 20th top-20 finish at the NCAA Tourney.

Ibrahim was a master recruiter who coached nine Clemson soccer players who were named to the ACC’s 50-Year Anniversary team in 2002. One of his players was named ACC Player-of-the-Year 11 times and he coached 16 different players who earned All-America honors by the National Soccer Coaches Association.

While he had many outstanding seasons, his two national championship campaigns stand out. His 1984 team posted a 22-4 record, but it had a difficult path to win the title. Along the way, Clemson had to defeat the top-four seeds in the tournament, including a victory over two-time defending champion and top-ranked Indiana in the championship match.

Clemson downed the Hoosiers 2-1 in the Kingdome in Seattle, WA in a match televised nationally on ESPN. It marked the first time in NCAA Tournament competition in any sport that a team beat the top-four seeds in the field to win the championship.

Clemson was rewarded by playing host to the Final Four that year. The Tigers won their semifinal match over #8 North Carolina and the championship match over #20 San Diego State. Clemson defeated the Aztecs by a score of 2-0 at Riggs Field, the only time the Tigers have won a national title in any sport on their campus.