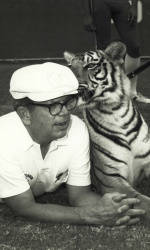 This weekend, we honor the greatest accomplishment in Clemson football history, the 12-0 season of 1981 that concluded with a 22-15 victory over Nebraska in the Orange Bowl and the National Championship. I was in my fourth year at Clemson as an assistant sports information director under Bob Bradley.

It was certainly a remarkable year, one that I remember vividly. Below is a chronological rundown of some of the more unusual, ironic, record-breaking, and entertaining moments of that season.

George Dostal’s Sign In the summer of 1981, Strength Training Coach George Dostal posted a sign in his facility that read “1982 Orange Bowl Clemson vs. Nebraska.” At the time, Nebraska had the best strength training program in the country and Dostal wanted the Tiger program to emulate the Huskers in that area.

He posted the sign as a goal, one that seemed unrealistic at the time for a program that had a 6-5 record the previous year. However, he certainly proved to be a soothsayer at the end of the season.

A Live Tiger For Picture Day On August 23, 1981, we held picture day at Memorial Stadium. A fan who owned a tiger had contacted the athletic department and asked if we were interested in having it present for the day. Mr. Bradley thought it would be a good addition that would attract some attention to the program, at least on the local level.

It was a big hit. The tiger was unusually tame as it posed with players for position pictures. Near the end of the session, Bradley got on all fours next to the animal. At one point, the tiger started to lick his ear. Mr. Bradley told all who were watching, “that tiger was whispering to me that the Tigers were going 11-0.”

Perry Gets a Nickname William Perry was a popular freshman in 1981. He had a charismatic personality and was Clemson’s first 300-pound player. There was a fascination with his athletic abilities and he was very quotable. His quote, “Even when I was little, I was big,” made Sports Illustrated’s “They Said It” column.

His legend grew when teammate Ray Brown gave him the nickname “G.E.” Brown first called him that when he tried to get on an elevator in Mauldin Hall, the football dorm in those days. Perry seemed to take up the entire elevator as Brown said, “William, we are going to start calling you `G.E,’ because you are as big as a refrigerator.”

Bob Bradley heard the story and told the media about it. However, soon Bradley had to adjust the nickname to the more general “Refrigerator,” because the NCAA deemed he would be seen as endorsing the company, which would have been a violation to refer to a player after the General Electric company.

Trailing Wofford Clemson did not look like a national title contender a quarter into the season. The Tigers opened with Wofford, then an NAIA school that replaced Villanova on the schedule the previous April when the Wildcats dropped football.

The Terriers successfully ran the ball with a “wingbone offense” against Clemson’s defense and took a 3-0 lead in the first quarter. Think of the odds you could have gotten against Clemson winning the national title at the end of that first quarter when the score was 3-3.

Wofford gained 165 yards on the ground against a defense that would finish eighth in the nation in defending the run. Only Nebraska would gain more rushing yards against the Tiger defense in 1981.

A Pulled Hamstring Clemson played its first indoor game against Tulane in the Superdome in New Orleans, LA in the second game of the season. During pregame practice, freshman punter Dale Hatcher wowed players and coaches on both teams by hitting the gondola above the field with a punt, something only Oakland Raider punter Ray Guy had been able to do.

Bob Paulling came off the bench to kick two field goals in Clemson’s 13-5 victory. Paulling did not know he was going to kick that day until pregame workouts. Donald Igwebuike, the starter who was also a top goal-scorer on the Clemson soccer team, was late for the team bus as it left the hotel. As Igwebuike chased the bus down at the end of the parking lot, he pulled the hamstring on his right leg to the point where he could not play.

Forcing Nine Turnovers I have heard some loud crowds at Death Valley in my 34 years covering the Clemson program, but September 19, 1981 stands out. That day, Herschel Walker and defending National Champion Georgia came to town. Clemson fans were in another gear.

The Tigers were 2-0 for the first time since 1970, and with a defense that was among the best in the country, Clemson fans thought the Bulldogs were ripe for an upset. That defense proved to be the deciding factor, as it forced nine Georgia turnovers, including two lost fumbles by Walker. Nine different Tigers were responsible for the turnovers in the all-around team effort.

The 13-3 Clemson win was the only regular-season loss of Walker’s college career.

Second-Half Comeback at Kentucky With Clemson’s victory over Georgia and two weeks to talk about it, ABC decided to broadcast the Clemson vs. Kentucky game in Lexington on October 3 to a large part of the South. It was an opportunity for Clemson to impress more polls voters, but the first half was dreadful. Clemson had just 65 yards of total offense in the first half and Kentucky led 3-0 at halftime.

Danny Ford always told his teams (and the media) that the first five minutes of the second half were the most important of the game. I was not in that locker room at halftime, but I am sure he told the team that (among other choice terms).

The Tigers came out of the locker room and drove 83 yards in 13 plays behind a strong running game that featured Kevin Mack (who was coached in high school by current Clemson Defensive Tackles Coach Dan Brooks). Mack scored on an 11-yard run to give the Tigers the lead. Clemson went on to outscore Kentucky 21-0 in the second half and won 21-3.

Looking back, that first drive of the second half was Clemson’s most important offensive possession of the 1981 season.

465 Pushups By Ricky Capps Clemson’s defense had been the dominant story of the 1981 season until the Wake Forest game on Halloween. The Tigers went 18 straight quarters without giving up a touchdown at one point during midseason.

That changed with the 82-24 victory over the Demon Deacons. The Tigers never had to punt and were 12-12 on third down, the longest streak of third-down conversions in school history.

The most memorable example of Clemson’s domination took place in the fourth quarter when a #44 scored on a 72-yard run. We did not have any idea who he was in the press box, as we did not have an offensive player on the roster with that number.

We called down to the sideline and found out it was Craig Crawford, who had never run the ball previously. That was the longest run in history by a Tiger on his first carry until Mike Bellamy broke that mark this year against Troy when he raced 75 yards for a score on his first career carry.

It was a day of physical exertion for Tiger mascot Ricky Capps, who did 465 pushups that day. He could have done 76 more, but the Demon Deacon mascot felt sorry for him and actually came to the Clemson sideline and did the pushups for him after the Tigers scored their next-to-the-last touchdown.

Robelot Invites Bear Bryant to Tiger Pep Rally After the victory over Wake Forest, Clemson had an 8-0 mark and improved to #2 in the nation. The Clemson campus was at a fever pitch and Danny Ford’s popularity was at its zenith.

Jane Robelot, who would go on to fame with the CBS television network, was the senior leader of Central Spirit in 1981. Still noted for her ability to think outside the box to this day, Robelot wanted to have a pep rally for the upcoming North Carolina game, the first meeting of top-10 ranked teams in ACC history.

This was a bit unusual, because it was a road game. Robelot wanted to promote this rally as a “Danny Ford Appreciation Rally.”

Robelot went to Frank Howard’s office in Jervey Athletic Center and asked him to call his good friend Bear Bryant and invite him to be the featured speaker at the rally. That’s right, the Bear Bryant, Ford’s college coach at Alabama, who was still coaching the Crimson Tide. His team was still in the National Championship hunt with a #5 national ranking.

Robelot thought she had a shot to lure Bryant, because Alabama had an open date that weekend. What would Bryant rather do on a Friday off in November?

So Robelot went to Howard’s office in Jervey and asked him to call Bryant. Not one to disappoint a pretty co-ed, Howard pulled out Bryant’s direct line and called him on his speaker phone.

“Hey Bear, I am here with this pretty little girl who wants to invite you to come to our pep rally on Friday.”

How I would love to have a tape of that conversation. Bryant politely declined, but wished his protegé the best in Chapel Hill.

It was a defensive struggle throughout. The Tigers led 10-8 as North Carolina took over for one final drive. On a third-down play, Tar Heel quarterback Scott Stankavage threw a swing pass in the right flat that was incomplete. Only one player hustled after the ball thinking it could have been a lateral. That player was Clemson All-American Jeff Bryant. He earned his entire four-year scholarship by chasing past players to recover the ball for the Tigers. Clemson ran out the clock to move its record to 9-0.

The headline in The Greenville News the next day was, “Tigers are 10-8-cious.”

The McSwain Brothers Clemson went to South Carolina ranked #2 in the nation with a 10-0 record (talk about a tense situation). And when South Carolina scored the first touchdown of the game, it got worse.

The McSwain brothers came to the rescue. Rod McSwain blocked a punt that was scooped up by Johnny Rembert, who raced in for a touchdown that changed the momentum of the game. McSwain and Rembert would later become teammates with the New England Patriots.

In the second half, Chuck McSwain led a Clemson ground game that wrapped up the 29-13 victory. Chuck gained a career-high 151 yards on 25 carries and scored two touchdowns.

A Squirming Jim Phillips Jim Phillips had been the “Voice of the Tigers” since 1968, but he could not broadcast Clemson’s biggest game in history. In those days, bowl games had their own national radio contracts and did not allow local networks to originate the game. What a shame that we have no calls from Phillips from Clemson’s win over Nebraska. He attended the game, but just squirmed in his seat, his voice silent.

When Andy Headen batted down Mark Mauer’s long pass to clinch Clemson’s 22-15 victory, Tiger players put Danny Ford on their shoulders. In every picture beside him is Jeff Stockstill, a sophomore wide receiver and the brother of former Tiger Assistant Coach Rick Stockstill. Years later, Jeff confessed it was planned on his part. He knew that picture would live forever in Clemson history. He was right.

The following week, Perry Tuttle was on the cover of Sports Illustrated, the first and still only active Clemson athlete to adorn the cover of that publication. The following week, former Tiger Dwight Clark made “The Catch” for the San Francisco 49ers in their NFC Championship victory over the Dallas Cowboys. Clark was on the cover making that catch on the next cover, giving Clemson Sports Illustrated cover boys in consecutive weeks.