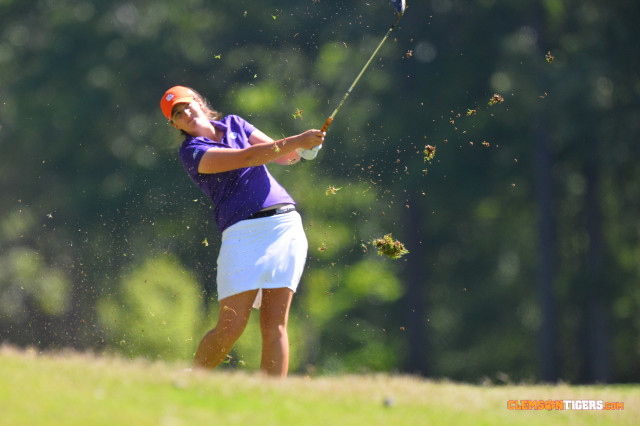 Clemson, S.C—Sydney Legacy shot a final round 73 on Saturday in difficult conditions to finish third individually and lead Clemson to a ninth-place finish among 17 teams at the Bryan National Collegiate at Bryan Park Country Club near Greensboro, NC. The tournament was Clemson’s final competition prior to the ACC Championship that starts April 21 in Greensboro.

Legacy had the third best round of the day among the 95 players in the field. Saturday’s round was played in a steady rain and low 40 degree temperatures. Only one team, Wake Forest, shot better than 17 over par for the round. The Demon Deacons won the tournament with a 54-hole score of 888, five shots ahead of seventh ranked Furman. Clemson finished at 915 for the three rounds, two shots ahead of 18th ranked Miami (FL)

Legacy had two bogeys, one birdie and 15 pars during an excellent performance. She played the par five holes at four under par for the tournament, tied for second best in the field. The third place finish was the best of the senior’s career, and her third top 10 in the last four tournaments. She scored a 73 in all three rounds to finish at 219.

Kennedy Swann was the only other Clemson golfer to break 80 on Saturday. The sophomore had a 78 and finished 53rd for the 54 holes at 233. Earlier in the tournament she had the second eagle of her career. Alice Hewson was Clemson’s second best golfer for the tournament with a 47th place finish at 232.