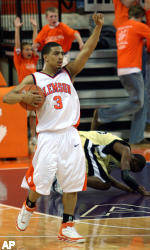 CHARLOTTESVILLE, Va. (AP) – Sean Singletary hit a 15-foot jumper with 1:12 left to put Virginia ahead, and the Cavaliers hit seven of eight free throws down the stretch to nail down a 64-58 victory over Clemson on Saturday.

Vernon Hamilton started the run with a running one-hander in the lane with 7:35 left, and Cliff Hammonds capped it with a baseline jumper to give the Tigers a 53-52 lead with 4:35 left.

Virginia’s Jason Cain made three free throws over the next two minutes to put Virginia back in front 55-53 before Hammonds converted a three-point play to give Clemson its last lead, 56-55, with 1:33 left.

Singletary’s jumper made it 57-56. Singletary sank three foul shots and Joseph and J.R. Reynolds each hit a pair to help Virginia secure its fifth consecutive victory over Clemson and the first ACC win for first-year coach Dave Leitao.

Singletary finished with 17 points, Cain with 12 and Reynolds with 10.