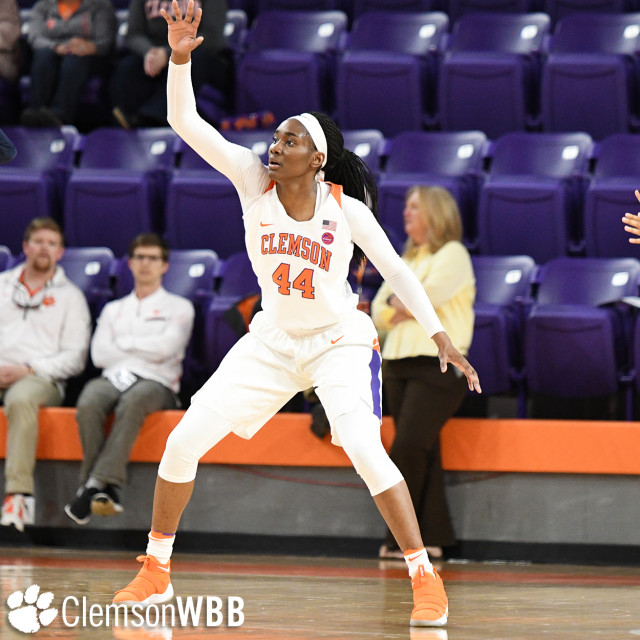 The Tigers played well defensively in the first half, outrebounding the Panthers 21-11 and forcing eight turnovers, but struggled offensively, making 2-for-12 from field goal range in the second quarter. Freshman Destiny Thomas hit a three at the buzzer, putting the Tigers within nine points at halftime, as the Panthers led 28-19.

Clemson continued the momentum from Thomas’s three to open the second half, going on a 9-0 run in the first three minutes of play to tie the game at 28-28, after a three-pointer by Francesca Tagliapietra and two free throws by Kobi Thornton. Pitt then countered with a 15-5 run to extend its lead to 10 points at the end of the third quarter, and then outscored the Tigers 15-9 in the final period to provide the final margin.

Thornton finished the game with 15 points, eight rebounds and two blocked shots. It was the sophomore’s sixth straight game in double figures in scoring, and her seventh out of 10 ACC games. Senior Alexis Carter posted seven points and five rebounds and junior Danielle Edwards recorded a season-high 10 rebounds in the contest.

The Tigers host their third-straight home game at Littlejohn Coliseum on Sunday, Feb. 4 at 2 p.m. versus Georgia Tech. The game is designated “National Girls and Women in Sports Day,” and in honor of the occasion, members of the Clemson women’s soccer and volleyball teams will host a free sports clinic for children 12 and under from 12:30-1:30 p.m. Participants should enter the coliseum through the Burton Gallery entrance. All participants will receive a free t-shirt and pizza.