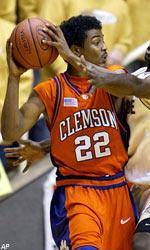 Kenneth Lowe scored 24 points and the 20th-ranked Boilermakers, the only team that had never won a game in the five-year history of the series, beat Clemson 76-64 on Wednesday night.

“I’m just not for being told who we should play,” Keady said. “Any Big Ten team ought to be able to play any team in the nation. We’ve always played ACC teams; we highly respect that league. … We’ll play anybody anyplace, but I don’t want to be told to do it.”

The Boilermakers (5-0), off to their best start in six years, were coming off an upset of then-No. 2 Duke, another ACC team, in the championship game of the Great Alaska Shootout last week.

“To beat Duke and then lose this game, you gain nothing,” Keady said. “So we did a good job of taking care of business, but to be a Top 20 challenger in the nation, we have to do a lot better than this. We just missed too many layups.”

Three straight 3-pointers by Lowe put Purdue in front 9-8, and the Boilermakers held the Tigers (3-1) scoreless for more than six minutes midway through the period. After a basket by Clemson’s Chris Hobbs, David Teague scored for Purdue and Ivan Kartelo added four straight free throws for a 24-10 lead. The Boilermakers’ biggest lead in the first half was 35-20 after a 3-pointer by Melvin Buckley.

“I just shot the ball when I was open,” said Lowe, who was 4-of-6 from long range. “We have to compliment the big guys for that. They’ve been screening well for us, probably the best screening since I’ve been here.”

Sharrod Ford, who led Clemson with 12 points and five blocked shots, had two baskets in the final two minutes of the first half and another early in the second as the Tigers cut the lead to 10 points.

But three straight baskets and two free throws by Brandon McKnight helped Purdue to a 71-53 lead, and the Tigers came no closer than 10 points until a 3-pointer by Lamar Rice made it 73-64 with a minute to go.

Lowe ended the comeback the same way he started, with a 3-pointer.

“It was a very physical game,” Clemson coach Oliver Purnell said. “They did a good job adjusting to that and playing that way and banging us. I’d say right now, that probably isn’t our kind of game.”

Purdue held the Tigers to 43 percent shooting, compared with their previous season mark of 53 percent.

“Our inability to get the ball into the post was the problem,” Purnell said. “We felt we could score inside, but they were pushing us out. We were turning the ball over and didn’t get inside enough.”

Teague and Kartelo each finished with 12 points. Shawan Robinson and Rice each added 11 points for Clemson, which was held 22 points under its season average.