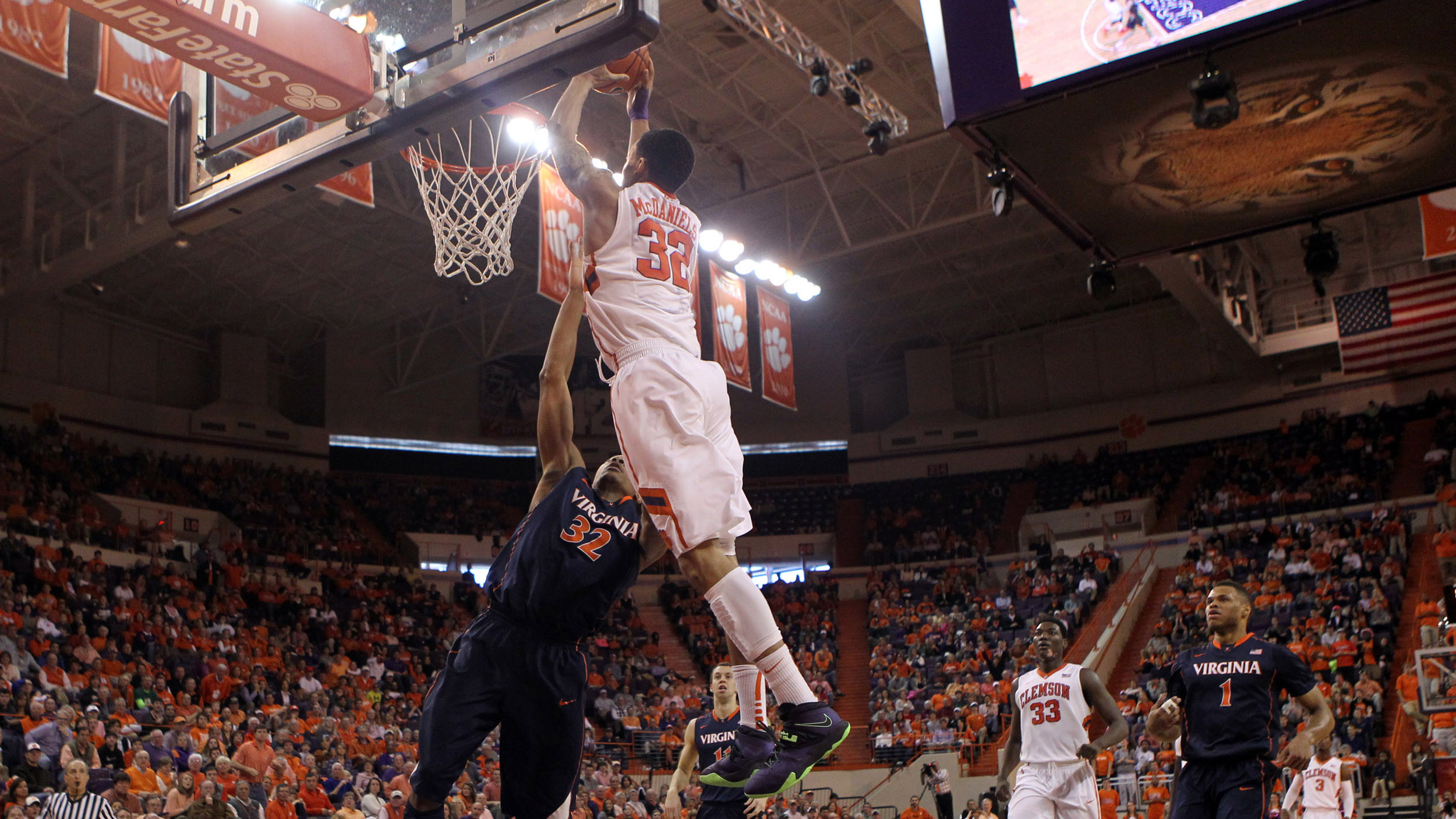 CLEMSON, SC – Clemson led 43-37 in the second half, but No. 16 Virginia made six of its last seven shots in a 63-58 victory Saturday at Littlejohn Coliseum. The Cavaliers, who upped their winning streak to nine games, moved to 21-5 overall, 12-1 in the ACC. Clemson, who has lost three straight games for the first time this season, fell to 15-9 overall, 6-6 in league play.

The Tigers were without the services of starting center Landry Nnoko, who has the flu. K.J. McDaniels led Clemson with another brilliant performance. The Tiger junior was 6-of-13 from the floor and 11-of-13 at the free throw line to finish with a game-high 24 points. He was Clemson’s only player in double figures. He was Clemson’s leading rebounder with just four on the afternoon, a sore spot with Nnoko out. Virginia dominated on the glass with a +13 margin, the largest disparity of the season for Clemson.

Clemson was hot at the start, connecting on its first six shots as it jumped out to a 12-4 lead on the Cavs. Still up 21-16 after a Harrison three, UVa put together a 12-0 run to seize control at 26-21. Joe Harris scored a driving layup and consecutive three-pointers to lead the charge. A wing three by Malcom Brogdon made it 29-23 in favor of the ‘Hoos, but McDaniels came right back with an old-fashioned three-point play and a banker to pull Clemson within one. Tobey tipped in a miss at the buzzer to provide the three-point halftime cushion, 31-28.

The Tigers came out stingy on the defensive end in the second frame, limiting UVa to just one of its first 12 shots from the floor as Clemson took a 38-36 lead into the under-12 timeout. Up 39-37 just before 10 minutes left, Clemson got a steal at midcourt and McDaniels brought the house down with an alley-oop pass from rarely-used Austin Ajukwa on the break. Ajukwa finished with six points in 13 minutes.

The lead grew to six before UVa chipped away and tied it at 43 on a Harris three after great ball rotation. Brogdon put the Cavs ahead with six to play on an up-and-under move from the right side. UVa’s lead was cut to one at 49-48 on a Hall shot in the lane, but Harris answered with a deep three from the wing.

Harris again had an answer that put UVa up 57-52 on a pretty floater, but Ajukwa answered with his second triple of the half with 1:43 remaining. The Cavs got two free throws from Brogdon to move ahead by four, but a rainbow three from McDaniels pulled Clemson within one with 20.7 seconds left. UVa made its free throws down the stretch, and Jordan Roper‘s three to tie in the final 10 seconds was long.

Virginia center Mike Tobey was 7-for-9 with 14 points, a huge factor Saturday for the Cavs. Harris led the way with 16 points, while Brogdon added 14 and Anthony Gill posted 12.

The Tigers host NC State on Tuesday. The game between the Tigers and Wolfpack tips off at 7 p.m. from Littlejohn Coliseum.