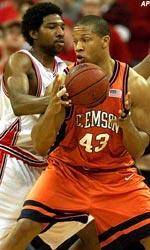 RALEIGH, N.C. – Julius Hodge had 18 of his 20 points in the second half Sunday while Josh Powell scored 17 on 8-for-8 shooting as North Carolina State beat Clemson 78-56.

Marcus Melvin added 15 points for the Wolfpack (12-5, 5-2 Atlantic Coast Conference), who won for the fourth straight time in the series. N.C. State, which was coming off a 75-60 loss at Maryland on Thursday, jumped to an early double-figure lead against the Tigers (11-6, 1-6) and was never seriously threatened.

Edward Scott scored 12 points to lead Clemson, which has lost four straight games and six of eight since starting the season 9-0.

Hodge had a tough first half, going 1-for-5 with two points and three turnovers. But he opened the second half by hitting his first four shots, including a 3-pointer off a crosscourt pass from Scooter Sherrill at the 18:10 mark.

His layup along the right baseline 90 seconds later gave the Wolfpack a 43-30 lead.

Once Hodge got going, the Wolfpack offense settled into rhythm. N.C. State pushed to a 52-36 lead on four straight points from Powell, the last bucket coming off a feed from Hodge on a fast break with 13:07 left.

The Tigers twice pulled to within 11 points only to see the Wolfpack answer. Hodge provided one of the momentum-killers, hitting a 3 from the top of the key for a 61-47 lead with 8:17 left. He added a 3 from the left wing with the shot clock winding down for a 69-52 lead with 5:05 to play.

The Wolfpack went 7-for-17 from 3-point range in the first half and held the Tigers to 36 percent shooting, but managed just a 32-24 lead at the break.

The Wolfpack started quickly, getting 3-pointers from Sherrill on its first two possessions. N.C. State hit five of its first seven shots, taking a 13-2 lead on a 3 from Melvin.

But the Wolfpack went scoreless for the next 4 1/2 minutes, allowing Clemson to score six unanswered points. Melvin ended that run with a four-point play, followed by another 3 from Sherrill for a 20-8 lead midway through the half.

N.C. State maintained its double-digit lead until the final seconds of the first half. The Tigers closed the half with five straight points, ending with Chris Hobbs’ putback of a missed free throw by Scott.