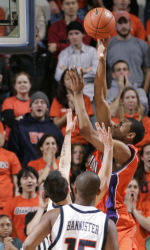 Virginia led for much of the second half but could never pull away from the Tigers, who shot 30 times from behind the arc and made enough to stay in striking distance.

Virginia’s J.R. Reynolds went to the line with 13.3 seconds remaining and a chance to ice the game, but he missed the front end of a one-and-one. Clemson got the rebound, but couldn’t make the necessary shot to tie or win in the frantic finals seconds.

The Tigers were paced by Olu Babalola’s career-high 22 points. They also got 15 Cheyenne Moore and 13 from Ford, the only starter not to make a 3-pointer.

Virginia led 41-36 at halftime as Singletary and Smith each scored 12. Neither team defended well in the opening 20 minutes. Virginia shot 51 percent and Clemson shot 50 percent, including 7 of 12 effort from behind the arc.