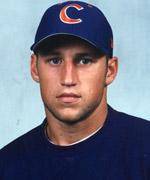 Left fielder Sean Gamble threw out Herman Demmink at the plate to end the game, giving #7 Auburn a 5-4 victory over Clemson. Brad McCann’s two-out single brought home Garrick Evans from third, but Demmink, who tried to score from second, was called out by home plate umpire Billy Pittman in a close play. Auburn improved to 15-2 while Clemson dropped to 6-6 for the season. The ACC Tigers have lost their six games by a total of nine runs.

Arnold Hughey (4-0) recorded his fourth victory against no losses for Auburn. Stephen Register earned his fourth save by pitching the final 2.2 innings. Starter Tyler Lumsden (0-1) suffered the loss.

Auburn added two more runs in the fifth inning after Mike Hnytka led off the inning with a single to right center field. Clete Thomas doubled down the left field line advancing Hnytka to third. Both scored on Ben Sprague’s single to center field.

Clemson scored a run in the bottom of the fifth. Brad McCann’s single to left center field.

Clemson cut Auburn’s lead to 5-3 in the bottom of the seventh inning. Leading off the inning, Josh Ingram hit a pinch-hit home run down the left field line. The at-bat was Ingram’s first in front of a home crowd. He is now 2-3 in his career with two home runs. Evans followed with a double down the left field line and advanced to third on Tony Sipp’s grounder to second. Pinch-hitter Demmink drove Evans home with a single up the middle.

Clemson tacked on another run in the bottom of the ninth, but the rally fell short. Evans singled to right field and advanced to third on Demmink’s double down the right field line. McCann then singled through the left side,scoring Evans. Demmink was thrown out at the plate to end the game.

McCann led the Tigers with three hits, while Demmink and Evans were both 2-for-2. Clemson outhit Auburn 13-6 and was able to just score four runs even though it had 17 baserunners in the contest.

These two teams square off for the third time on Sunday at Doug Kingsmore Stadium, with first pitch scheduled for 2:06 PM. Game will be televised by Comcast/Charter Sports Southeast.