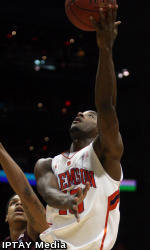 ATLANTA, GA – Freshman guard Devin Coleman scored 15 points to lead Clemson in the opening round of the ACC Tournament, but lost 68-63 to No. 10 seed Virginia Tech on Thursday at Philips Arena. The Tigers shot 54 percent in the first half, but just 38 percent after halftime. Virginia Tech made 17-of-20 free throws in the second half to solidify the win.

Coleman led the Tigers in scoring for the first time in his career. The Philadelphia, PA native made 6-of-10 field goals, including a three, in 26 minutes off the bench. Four Tigers reached double figures in the scoring column. Andre Young scored 13 for Brad Brownell’s team, while Atlanta area native Tanner Smith added 12. Smith also had six assists and six rebounds.

Virginia Tech received 24 points from leading scorer and second-team All-ACC selection Erick Green, who had just eight a week ago in the Hokies’ loss at Clemson. Dorenzo Hudson chipped in 19 points as the only other Tech player in double figures.

Clemson got out to an early 8-2 lead behind strong play from Young, but the Hokies took advantage of some Tiger turnovers and countered with a 14-3 run to take a five-point lead. A three by Smith knotted the game at 21 apiece at the 7:04 mark, but Clemson went two minutes without scoring as the Hokies mounted a 6-0 run that was ended on a Smith layup.

Coleman’s second three-point play of the half gave the Tigers a 32-30 lead with 1:45 remaining. A miscue by Tech set the stage for Young, who arched a rainbow shot over a Hokie defender to beat the shot clock with 30 seconds left to give the Tigers a 35-30 halftime edge.

The Hokies came out firing after the break and took a 37-36 lead just 90 seconds into the second frame. But, Jennings knocked in a three, Booker made a free throw, and Smith drove the lane for two and Clemson was back in front 42-40 at the media timeout.

Coleman broke a 48-48 tie with another driving layup, his fifth of the game, to put Clemson up two with 6:53 left. His shot broke a four-minute scoreless drought, but fortunately, Tech scored just two in that time frame. Hudson hit a huge three with four and a half minutes left in transition that lifted the Hokies to a 55-52 lead. Then, Green hit one on the next possession and the lead was quickly at six.

Virginia Tech held its lead in the final minutes as Clemson made a run. The Tigers made just 3-of-7 from the free throw line inside the final 80 seconds of the game. A Jennings three cut the lead to 66-63, but the Hokies made a pair of freebies to provide the final margin.