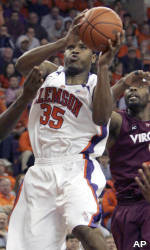 Delaney put the Hokies (17-10, 7-6 Atlantic Coast Conference) ahead for good with 7 minutes left, then kept pushing them forward to keep their NCAA tournament hopes alive.

The Hokies jumped on the court with Delaney leading the cheers. His latest performance capped an amazing two games against the Tigers this season. He had 37 points last month – still tops in the ACC this year – in Clemson’s 86-82 win at Blacksburg.

Delaney didn’t start out well, shooting 3-of-10 from the field for nine points in the first half. He and his teammates picked up the pace in the second half. Delaney hit three of his four 3-pointers down the stretch and the Hokies were 7-of-11 from behind the arc in the second half.

Terrence Oglesby had 22 points, including six 3-pointers, for Clemson. However, he couldn’t get free on the Tigers’ final play and Stitt had to force up a wild shot that did not have a chance of going in.

A.D. Vassallo added 21 points for Virginia Tech, which had lost its past four games to Clemson.

But this is a series that almost always goes down the wire – the past seven games have been decided by five points or less – and this one was no different.

Delaney missed a close-in shot in the final minute that Booker converted into a breakaway layup to bring the Tigers within 78-77.

Virginia Tech looked ready to pull away in the middle of the second half. Hank Thorns hit a go-ahead 3-pointer and a driving basket, then Delaney converted a three-point play after falling hard to the court in a collision with Booker. Delaney followed with two more free throws to put the Hokies up 68-61 with 9:21 left.

That’s when Oglesby, fighting a cold, stepped up with a foul shot and two long 3s to tie the game.