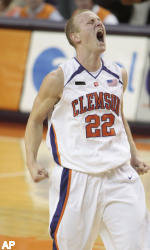 Oglesby’s not so bad from behind the arc either.

Booker’s 3-pointer at the end of regulation was one of the Tigers’ two buzzer-beating baskets. Then Oglesby put the game away with three 3-pointers in the second overtime of 18th-ranked Clemson’s 97-85 win over Florida State on Saturday night.

“He’s been knocking down shots,” Oglesby said. “I’m not going to argue with him.”

Booker’s gone 4-of-4 from behind the arc the past two games after not make any his first 49 games. No doubt his biggest one came with the game clock winding down and Florida State ahead 67-64.

Booker found himself alone, and threw up a ball that banked off the backboard for the tying basket.

This time, Toney Douglas nailed a three from about the same spot as Ellington’s to put the Seminoles (12-5, 1-1) ahead and set up Booker’s heroics.

“It was like deja vu. We went through that once. We didn’t want to go through it twice,” Clemson forward James Mays said.

About five minutes later, it was lanky star James Mays who saved the Tigers with his follow fadeaway after K.C. Rivers’ miss to tie the game at 78-all.

“I didn’t know how much time was left so I just put it up as quick as possible,” Mays said. “Never two buzzer beaters. But they were big and we needed them.”

Oglesby hit six 3-pointers, one leading to a four-point play. Half of them came in double OT as the Tigers finally put this one away.

“We didn’t want to give them another chance,” said Oglesby, who led the Tigers with 36 3-pointers coming in.

The victory was their seventh straight over Florida State at Littlejohn and ended a two-game losing streak.

Florida State coach Leonard Hamilton was trying for his 300th career victory and his 100th win with the Seminoles. Instead, he watched his undermanned team — four of his five starters played 47 minutes or more — wear out down the stretch.

Hamilton says that led to Clemson getting the second and third chances. “Every big one they had to have it seemed like they got,” Hamilton said.

Clemson took control of the game in the second overtime.

Rivers started the barrage with a 3-pointer for an 83-80 lead. Then Oglesby stepped up with two straight long-range shots for a 9-point lead.

After Douglas brought Florida State to 91-85 with his three, Oglesby did it one last time.

Booker had 29 points, including three 3-pointers. The sophomore had only made one long-range shot in his career before this.

Florida State was trying for just its second 2-0 ACC start since joining the league 16 years ago.

Uche Echefu led the Seminoles with a career high 24 points.

This time, Douglas made a 3-pointer from nearly the same spot in Littlejohn Coliseum as Ellington’s to put Florida State ahead 67-64 with 16.7 seconds to go in regulation.

Then in the first overtime, Echefu made just his seventh 3-pointer of the season from the right corner for a 78-76 lead with 15 seconds left in the first OT.

Oglesby and the Tigers made sure Florida State didn’t get a third chance at victory.

Clemson had an opportunity to move in front in the final minute of regulation. But with the shot-clock running down, Cliff Hammonds pushed the ball to Mays, who had trouble grabbing it with his heavily bandaged left hand.

Mays fractured a bone in warmups before Clemson’s overtime loss to North Carolina.

Mays blocked Jason Rich’s attempt with about 25 seconds left. However, Rich chased it back down for the Seminoles to set up Douglas’ three.

Booker found himself with the ball and time winding down. He smoothly threw up the tying shot to buy the Tigers another five minutes.

“It gave us life,” Booker said.

Oglesby’s four-point play helped the Tigers to a 56-45 lead with 9:47 to play. However, Florida State went on a 17-5 run to retake the lead on Isaiah Swann’s bucket.

Neither team took more than a 3-point lead until the final overtime period.

The Tigers have won seven straight games over the Seminoles at Littlejohn.

The Tigers became the first team in ACC history to start league play with two overtime games. Clemson coach Oliver Purnell is ready for more drama this season. “It’s like this every game in the ACC,” he said.