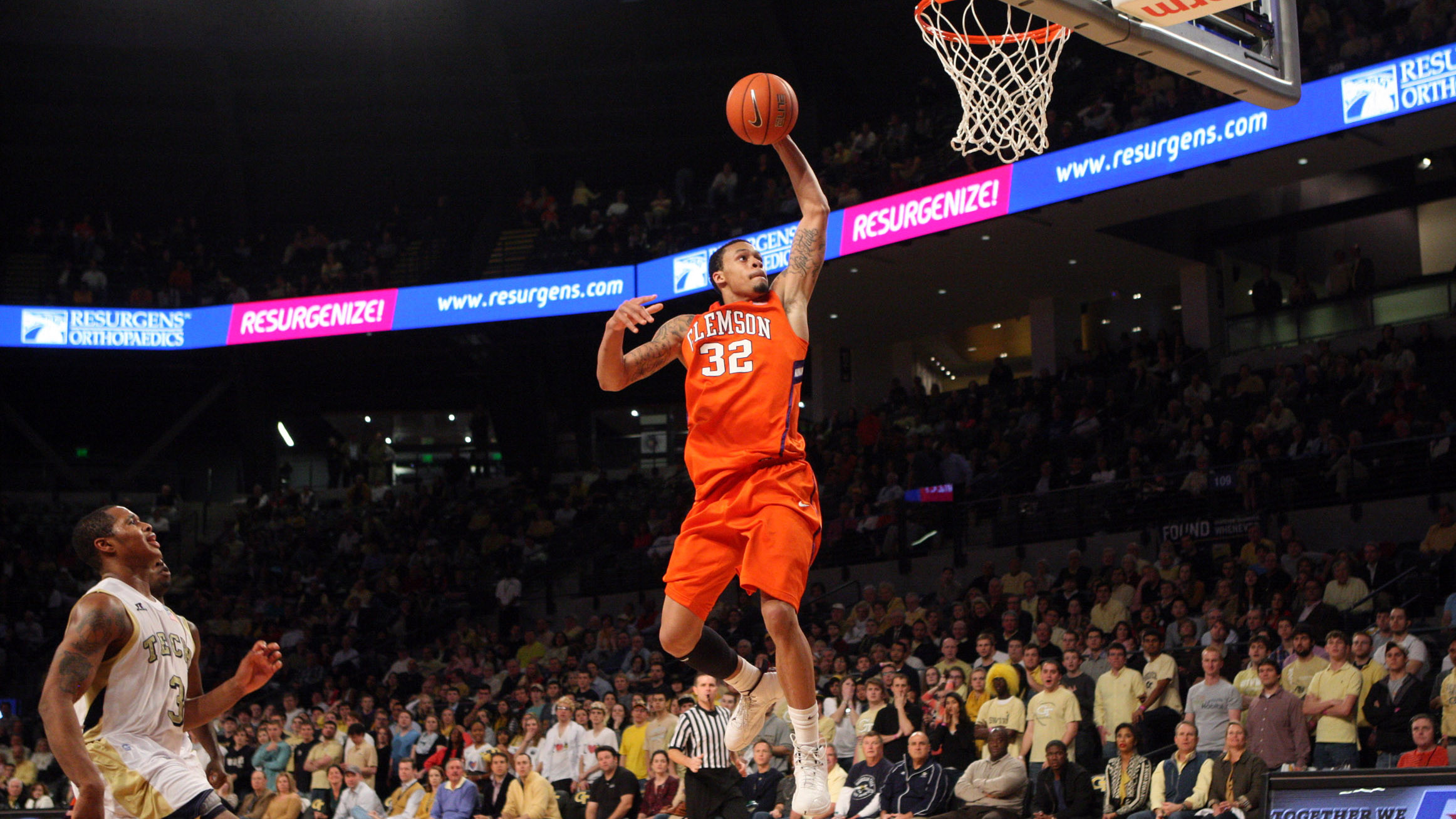 ATLANTA, GA – Clemson earned its first ACC road win of the 2012-13 season and defeated Georgia Tech for the seventh straight time in the series on Thursday at McCamish Pavilion, with a hard-fought 56-53 triumph over the Yellow Jackets. Clemson improved to 13-11 with the win, 5-7 in the ACC. The Jackets fell to 13-10 overall, 3-8 in league play.

The Tigers swept the regular season series for a third straight year, the first time that has happened since the 1979-82 era. The seven straight wins are the most by Clemson over an ACC opponent since an 11-game streak over Virginia from 1959-65.

Clemson’s top three leading scorers all reached double figures against Tech, led by K.J. McDaniels with 14 points. Devin Booker added 13 points and eight rebounds, while Milton Jennings tacked on 12 of his own. The Tigers shot 62 percent in the second half and finished the game 5-for-12 (.417) from three-point range.

The Tigers held Tech to just 15 first-half points, tying an opponent low in 88 games under Head Coach Brad Brownell. The Yellow Jackets shot 17.2 percent in the opening half and 53.8 in the second. Tech won the rebound battle 42-30.

For the first time since the game at NC State on Jan. 20, Clemson committed single digits in turnovers. After a combined 36 in their previous two games, the Tigers had just seven on Thursday.

Clemson raced out to a 10-3 lead at the first timeout behind efficient shooting, as the Tigers made their first two from behind the arc. Clemson cooled considerably from the field, scoring just four points over the next eight plus minutes. After Tech pulled to within four at 14-10, Clemson scored on a pair of drives to make it 18-10 – first on free throws by McDaniels and then a layup by Rod Hall. Booker scored a layup inside to give Clemson the 20-15 edge at intermission, despite shooting just 28 percent.

Tech put together an 8-5 run coming out of halftime to pull within two points at the 17:05 mark. The Yellow Jackets actually made their first five field goal attempts to start the half. Tech knotted the game at 30 before McDaniels stepped in front of an errant pass and coasted for a left-handed jam on the other end with just over 13 minutes left.

Clemson pushed the lead to nine at 41-32 on a 7-0 run, punctuated by Booker’s fifth basket. Jennings later connected on his third trifecta to give the Tigers a 12-point advantage at 47-35 at the under-8 timeout. A three from Chris Bolden cut the lead to 50-43 with four and a half minutes left, and then a runout layup by Robert Carter, Jr. brought the Jackets within four at 51-47 to prompt a Clemson timeout at the 3:27 mark.

Clinging to a four-point lead late, McDaniels first buried a free throw line jumper with 1:56 remaining and a leaner that banked in following a deflected pass with a minute to go. The second field goals gave the Tigers a 55-50 lead. With Clemson ahead 55-53, Jennings made a one-and-one opportunity and followed with a blocked shot of Mfon Udofia on defense to preserve the victory.

Next up for the Tigers is a meeting with the nation’s No. 3 ranked team in the latest AP poll, the University of Miami. The game is scheduled for 6:00 PM at Littlejohn Coliseum on Sunday. Limited tickets remain, and can be purchased at ClemsonTigers.com or by calling 1-800-CLEMSON.