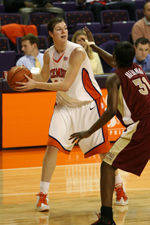 CLEMSON, SC – Four Lady Tigers scored in double figures, but the Clemson women’s basketball team was defeated by Tennessee Tech, 71-62, in its home opener on Friday night. The loss drops Clemson to 0-3 on the year, while the Golden Eaglettes claimed a victory in their first game of the 2005-06 season. The Lady Tigers held Tennessee Tech to 30.0% shooting for the game, but could not overcome 28 turnovers and the Golden Eaglettes’ 89.2 percentage from the free throw line.

Senior Amanda Frist led the way for Clemson with 13 points and four blocks in the contest. She also collected her 500th career rebound in the early minutes of the game and finished with seven for the night. Tasha Taylor, Julie Talley and Maxienne White also posted double-figure scoring totals for the Lady Tigers. White added eight rebounds in the effort as well. The team blocked 10 shots and edged the Golden Eaglettes on the boards, 38-37, while shooting 42.6% from the field.

Clemson started slow in the first half but recovered to take a 12-10 lead in the ninth minute of the game. The Lady Tigers extended their lead to nine points at the 7:11 mark before the Golden Eaglettes went on a 9-0 run to tie the game at 22-22. The Lady Tigers then outscored Tennessee Tech, 7-4, in the final four minutes of the period to take a 29-26 advantage into halftime.

Clemson relinquished the lead at the 14:25 mark of the second half and never regained control of the game. The Lady Tigers kept the score close for much of the final period, trailing by single digits the majority of the half, but were unable to pull ahead. The Golden Eaglettes went on to claim the victory by a score of 71-62.

Clemson will return to action on Monday, Nov. 21 against Mississippi in a 5:30 PM contest at Littlejohn Coliseum.