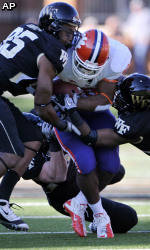 Harper finished one yard shy of his week-old career high, and ran 63 yards for a late score. Chandler Cantazaro kicked three field goals, while Parker finished 15 of 17 for 194 yards in just over 2 1/2 quarters with TDs covering 40 yards to Jaron Brown and 2 yards to DeAndre Hopkins.

They helped the Tigers (6-5, 4-4 Atlantic Coast Conference) win their first road game of the season and reach the 6-win mark for the 12th straight year. AdChoices

The last-place Demon Deacons (2-9, 1-7) were outgained 413-205 in losing their ninth straight, the second-longest active losing streak in the Bowl Subdivision.

Jimmy Newman’s 45-yard field goal with 8 1/2 minutes left and Josh Harris’ 1-yard scoring run with 6:02 to play helped Wake Forest avoid its second shutout of the season and first at home since 1994.

Da’Quan Bowers, the nation’s leader in sacks, set a school record by bringing down freshman quarterback Tanner Price late in the first quarter. That gave him a sack in a Clemson-record ninth straight game, and he finished with two sacks.

He led a defense that didn’t allow Wake Forest to cross the Clemson 35 until there were 10 minutes left to play and the Demon Deacons trailed 23-0.

Parker had his first multi-touchdown game since he threw for two scores in each of the first three games. His second TD came on the Tigers’ opening drive of the second half, a deliberate 11-play march that chewed up nearly 6 minutes. Parker’s strike to a wide-open Hopkins stretched Clemson’s lead to 20-0 with 4:35 left in the third. Promising redshirt freshman Tajh Boyd then took over on Clemson’s next series and finished the game.

Harper, once again the Tigers’ featured back while starter Andre Ellington missed a third straight game with a toe injury, took his final carry for a long touchdown but came up one yard shy of the personal-best 143 he gained in last week’s final-seconds loss at Florida State.

With representatives from the Charlotte-based Meineke Bowl scouting the Tigers, neither team made it into the end zone until the final minute of the first half. Parker lofted a pass to the right corner for Brown, who outjumped cornerback Josh Bush for the ball. That made it 13-0 with 46.4 seconds left before the break, and capped an efficient 30 minutes in which Parker was 12 of 14 for 174 yards.

Cantazaro kicked field goals of 43 and 22 yards in the first half, then added a 32-yarder in the fourth quarter.

But early on, the dominant force clearly was Clemson’s defense–one of the ACC’s stingiest, allowing an average of 17 points. Wake Forest had just 49 total yards in the first half and ran only two offensive plays in Clemson territory before the break.

Price finished 17 of 30 for 151 while Newman converted his 10th straight field goal, one shy of Sam Swank’s 2-year-old school record.