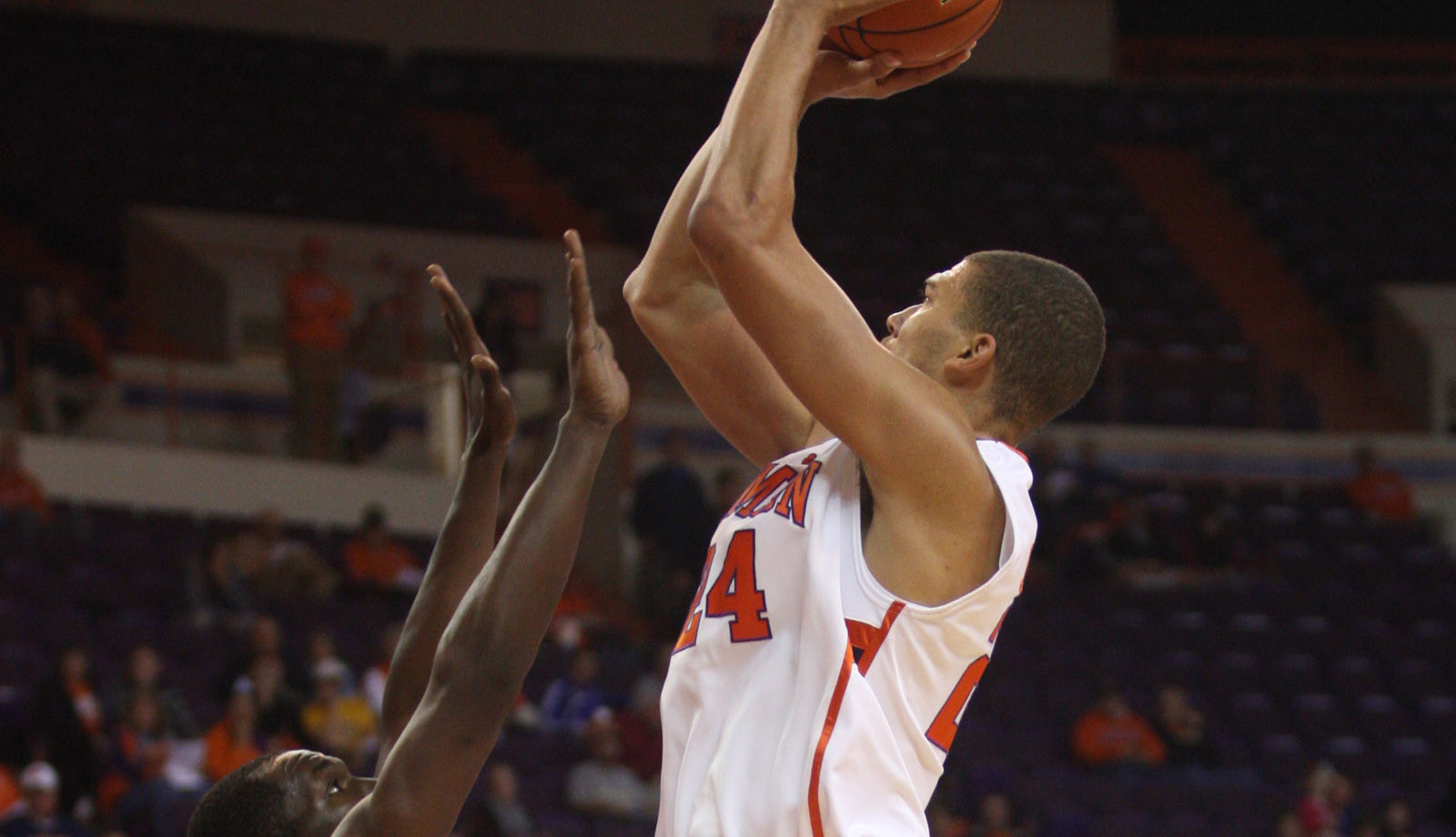 CLEMSON, SC – Milton Jennings and Landry Nnoko scored 14 points apiece to lead the Clemson men’s basketball team to a 72-42 victory over Lander in an exhibition Monday. The two post players were among four in double figures for Brad Brownell‘s team, which opens the regular season a week from Monday against Presbyterian College.Jennings was efficient with 14 points on 6-of-12 shooting. He added a team-high eight rebounds for the Tigers, who were without starting center Devin Booker due to a violation of team rules. Nnoko was 7-for-9 from the floor and added six rebounds and three blocked shots in a team-high 35 minutes of play. Adonis Filer, a freshman guard from Chicago, and K.J. McDaniels, a sophomore, both added 12 points for Clemson.The Tigers shot 52 percent for the game, 30-of-58 from the floor. Clemson owned a 34-28 advantage over the smaller Bearcats. The Tigers also tallied 19 steals off of 27 forced turnovers, converting it into 29 points. Clemson owned a 44-22 advantage in the paint and a 14-2 edge on second-chance opportunities as well. Lander shot 40.4 percent and was led by David Pruett’s game-high 17 points.Clemson put together an 11-0 run minutes into the game after Lander opened by scoring the first four points of the contest. The Tigers first pushed their lead to double digits on a layup by BYU transfer Damarcus Harrison at the 10:26 mark. The lead would grow to as much as 18 on multiple occasions in the first half, the last of which came on two free throws by McDaniels with 1:47 to play. Clemson took a 39-21 lead into the locker room.The Tigers were able to get out in transition effectively in the second half. McDaniels provided one of the game’s biggest highlights with an alley-oop dunk off a fast break pass from Harrison. Moments later, he had another dunk on a full-court assist from starting point guard Rod Hall to make the score 56-34 in favor of Clemson with 7:38 to play. Filer pushed the lead to 30 for the first time at the 1:25 mark on a pull-up jumper, one of five field goals for the 6-foot-2 rookie.In all, 10 players tallied at least four minutes and nine played double figures for Brownell’s squad. Starting shooting guard T.J. Sapp added nine points and four steals, while Harrison came off the bench to produce six points and four rebounds in 22 active minutes.The Tigers take on Presbyterian in their season opener on Monday, Nov. 12 in Littlejohn Coliseum. The game will tip off at 7:00 PM and be streamed live by ESPN3. Tickets are available by calling 1-800-CLEMSON or visiting ClemsonTigers.com.