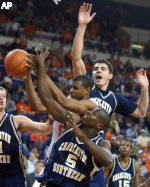 Akin Akingbala and Olu Babalola also had 10 points apiace for the Tigers (5-1), who shot 51.9 percent from the field.

Hammonds hit all five of his field goal attempts, including four 3-pointers. After missing his first eight 3-pointers this season, Hammonds, a freshman, has connected on 14-of-19 from beyond the arc.

The Tigers opened with a 9-0 run over the first 5:47 and the rest of the way was never in jeopardy of losing the lead. After a slow start to the second half, Clemson built its lead to 50-30 with 12:08 left to play on a Ford basket off an offensive rebound.

However, moments later Babalola aggravated his sprained right ankle and had to be helped off the court with 9:52 remaining in the game. He was then escorted to the locker room. Clemson’s biggest lead of the game was 22 points, which was reached on several different occasions during the second half.

Nathan Ball led Charleston Southern (1-3) with 13 points. The Tigers are now 93-12 in its history against teams from the state of South Carolina in Littlejohn Coliseum.

Clemson, which committed only six turnovers in the first half, took its first big lead with a 15-7 run that gave the Tigers a 31-17 lead with 2:19 left until intermission. Clemson went into halftime ahead 34-23.