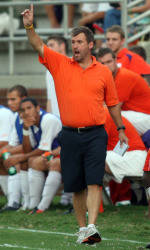 CLEMSON, SC – Iain Smith scored one goal and had three assists in leading Clemson to a 4-1 victory over Winthrop in a men’s soccer exhibition match at Clemson, SC Sunday night.

Clemson freshman Amadou Dia scored one goal and had one assist for the Tigers in the match as well.

Clemson will open the regular season this Saturday night at Alabama-Birmingham. Winthrop will play host to Brevard on Friday night as the Eagles open their 2011 season.

Clemson scored first at the 9:09 mark as Amadou Dia scored with an assist by Smith.

The Tigers scored again 5:13 later as Nick Burton crossed the ball to Smith whose half volley went into the netting from 14 yards out.

In the second half, the Tigers scored two goals early. Keegan Preist scored on a cross from Smith at the 57:08 mark. Smith received a pass from Dia and sent a crossing pass to Priest who headed the ball in from eight yards out.

Two minutes later, Wes Nelson scored a goal with an assist by Smith. This was Smith’s third assist of the night.

Winthrop scored with just under 10 minutes left to go in the match. Josh Choice scored with an assist by Alex Isern off a corner kick.

“We scored some quality goals tonight,” said Clemson Head Coach Mike Noonan. “The problem was what happened in between. We were complacent and slow. We still have a lot of improvement to make. We continue to progress in every match.”