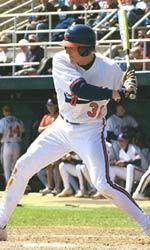 Jeff Baker and Khalil Greene also went deep to lead top-ranked Clemson to a 13-9 victory over Western Carolina on Tuesday night at Doug Kingsmore Stadium. Every Tiger starter had a hit as the Tigers improved to 31-4. Western Carolina dropped to 22-13.

Clemson took the lead for good in the seventh after trading runs with Western Carolina for most of the game. Khalil Greene to the plate. The senior belted his 11th home run of the season, this one a three-run shot, to give Clemson a 13-8 lead it would not relinquish.

Thomas Boozer (1-0) earned his first win of the year for Clemson by pitching 3.1 innings, allowing two hits and one run while walking one and striking out two. DeMaino and Coder each had three hits to pace the Clemson offense. Seth Foster (6-2) picked up the loss for the Catamounts.

Western Carolina took a 1-0 lead in the first when Alan Beck hit a two-out triple that bounced off the wall in right and later scored on a Donovan Minero single. Clemson answered immediately in the bottom of the frame with its own two-out rally. Greene singled and was followed by Baker’s 14th home run of the season to give the Tigers a 2-0 lead. In the second inning, Coder reached on an infield hit, stole second and came home on DeMaino’s single for a 3-1 lead.

The Catamounts came back with three runs in the third off of an RBI single by Beck and a two-run double by Todd Buchanan. Clemson regained the lead in the bottom of the frame when Chad Coder singled in a run to cap the scoring as Clemson secured a 6-4 advantage.

Western loaded the bases with one out in the sixth. Relief pitcher Thomas Boozer recorded the final out.

With two away in the bottom of the sixth, Johnson struck again, hitting another two-run bomb to right field to knot the game at eight. It marked the third multi-home run game of the season for Johnson.

Boozer set down the Catamounts in the seventh and gave up one run in the eighth while the Tiger bats went to work. He induced a 4-6-3 double play to end the game in the ninth.

Clemson will host seventh-ranked South Carolina on Wednesday night at 7:15 PM at Doug Kingsmore Stadium. A limited number of general admission and standing room only tickets will be sold at the left field gate starting at 5:00 PM.