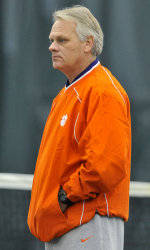 Clemson Defeats the College of Charleston 4-3

This was the season opener for both teams. Clemson is ranked 66th in the latest ITA poll. Today’s win marked the 10th consecutive year that the Tigers have won their season opener.

“The first matches of the season is always the toughest,” said Clemson Head Coach Chuck McCuen. “We are a young team and at the same time a deep team as far as talent is concerned. Today’s win should give us confidence.

“We played two true freshmen today and this should help them as well. The College of Charleston is a good team, and a mature team. I feel great having a win under our belt and we look forward to having a good week of practice as we prepare for Georgia,” said McCuen.

The College of Charleston clinched the doubles point at number-two doubles as Kyle Parker and Mickael Trintignac won over Clemson’s Ayrton Wibowo and Hunter Harrington (CU) 9-7.

The Tigers tied the match 1-1 as Gerardo Meza defeated Parker at number-three singles 6-2, 6-0. Dominique Maden gave the Tigers a 2-1 advantage as he won over Crescente Lesser 7-5, 6-2 at number-four singles.

However, the College of Charleston won the next two matches to tie the match 3-3. Tom Delme defeated Clemson’s Wibowo at number-two singles 3-6, 6-2, 6-2. The Cougars tied the match when Brice Allanic defeated freshman Hunter Harrington 6-3, 2-6, 7-6 at number-five singles.

Wellems, a freshman from The Netherlands who arrived on campus January 6, clinched the match for the Tigers as he defeated Hardy.

A match with the Citadel was previously scheduled for the afternoon of January 15, but it was cancelled and will not be made up this season.

Clemson will play at Georgia on Saturday, January 21, at 1:00 p.m. in the Tigers’ next action.