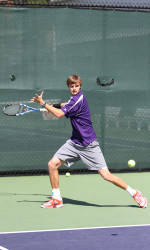 CLEMSON, SC – Clemson defeated 59th-ranked Miami 6-1 in an Atlantic Coast Conference Men’s Tennis match at Clemson, SC Sunday afternoon. With the win, Clemson improves to 5-6 overall, and 2-0 in the ACC. Miami falls to 6-3 overall and 0-2 in league play. This is the first time since 2006 that the Tigers have been 2-0 in the ACC.

After winning the doubles point, Clemson soon took a 3-0 win in the match after two singles victories. Dominique Maden of Clemson won his match over Henrique Tsukamoto at number-four singles 6-1, 6-1. His brother, Yannick Maden made it 3-0 when he defeated the Hurricanes’ Gabriel Flores 6-1, 6-3 at number-one singles.

Miami won its only singles match of the day at number-two singles when Omar Aly defeated Gerardo Meza 6-3, 7-6.

The Tigers’ Hunter Harrington defeated Diego Soto 6-3, 6-4 at number-four singles in clinching the match giving the Tigers a 4-1 advantage.

“We defeated a great team today,” said Clemson Head Coach Chuck McCuen. “I give a lot of credit to our assistant coaches John Boetsch and Evan Schreiner. “They do a great job and work hard day in and day out preparing the team. Our team is starting to buy in the `family approach’ to our program. Coach Boetsch told the team how important momentum is right before the match.

“I have a lot of respect for Miami and their program. Head Coach Mario Rincon and Assistant Coach Mark Dickson do a great job. We will work hard and prepare for South Carolina who will be coming in on Wednesday.”

Clemson will play host to South Carolina on Wednesday, March 14 at 2:30 p.m. at the Hoke Sloan Tennis Center in the Tiger’s next match.