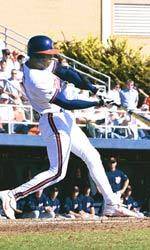 Clemson, SC- After an hour rain delay, Clemson defeated Charleston Southern 5-0 in baseball action from newly renovated Doug Kingsmore Stadium. The game was called in the middle of the eighth inning due to declining weather conditions. With the win Clemson improves to 2-2 on the season, while Charleston Southern drops to 3-6.

The Tigers got off to a blistering start despite the cold weather and rainy conditions Wednesday afternoon. Designated hitter Garrick Evans led off for the Tigers with a solo shot over the left field fence. The lead off home run was Evan’s first career homer as a Tiger. Clemson was able to manufacture four more runs in the first.

Brad McCann followed Evans with a double to right field and advanced to third on a passed ball from Buccaneer pitcher Robert Swindle. After Jeff Hourigan earned a walk, shortstop Russell Triplett knocked in a run with a single up the middle.

Collin Mahoney reached on an error by Buccaneer shortstop Brad Woods, a play on which Hourigan scored to make it 3-0.

Ryan Hub drove in the final two runs of the inning with a single to left field to give the Tigers a 5-0 lead after the first. The five-run Tiger first would prove to be the only scoring in a game which was dominated by pitching. After the first inning, the two pitching staffs combined for 22 strikeouts in 7.5 innings.

Robert Swindle (1-1) pitched a solid game despite being credited with the loss. He went 6.0 innings, gave up six hits, two earned runs, walked two batters and struck out 10.

Clemson starter Jeff Hahn (1-1) earned the win for the Tigers. Clemson Head Coach Jack Leggett was able to use eight pitchers in the win. The Tiger staff gave up just two hits and one walk, while striking out 12 Buccaneers.

Clemson will play host to South Carolina on Saturday at 1:00 PM at Doug Kingsmore Stadium.