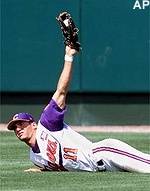 The Tigers (51-16) ruined San Jose State’s CWS debut with seven runs off four errors. Clemson will face the winner of Friday night’s game between Louisiana-Lafayette and Stanford on Sunday.

Casey Stone and Justin Singleton each drove in two runs for Clemson, which has won six straight since losing to Georgia Tech in the Atlantic Coast Conference championship game.

Ryan Mottl (10-3) allowed nine hits and six runs in five innings. Steve Reba, who got the Tigers out of a jam in the seventh inning, earned his second save of the season.

The Tigers chased San Jose starter Chris Key (13-3) after just 1 1-3 innings. It was the shortest outing of the season for Key, who went at least seven innings in each of his three NCAA tournament starts. Key allowed eight runs, three earned, on seven hits.

After San Jose State took a 1-0 lead in the second, Clemson came back in the bottom of the inning on consecutive singles by Jeff Baker, Ryan Riley and Mike Calitri, who bunted to load the bases.

Justin Singleton drove in Baker and Riley with a single to left.

The Tigers scored two more on errors and Boyd hit a three-run shot deep into the left-field bleachers.

The Spartans got three runs back in the fourth with a two-out rally, capped by Brian Stream’s triple to right-center that pulled San Jose within 10-5. Stream, charged with an error in Clemson’s eight-run second inning, drove in Gary Patchett and Ryan Brucker, who reached on singles.

San Jose threatened again in the seventh when Stream walked and Brandon Macchi doubled to right with no outs, but Reba got Junior Ruiz, Tony Tognetti and John Fagan to pop out to end the threat.

Tognetti and Fagan gave the Spartans a 1-0 lead in the second on back-to-back doubles. Tognetti lined a double that hit the wall on one hop and Fagan followed with a line drive that hit just a few feet below the top of the wall.

Fagan added a solo homer in the fifth to cut Clemson’s lead to 10-6.