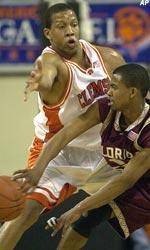 With the win, Clemson (15-8, 5-7) moves into a tie for fifth place in the league. The Tigers already have won enough games to make the NIT, and suddenly a strong ACC finish could mean an NCAA tournament berth.

The loss sends Florida State (12-12, 3-10) deep into the ACC basement, and with two of its final three games against the top of the conference, the Seminoles are almost assured to be in the conference tournament play-in game for the third straight year.

Florida State rallied from a 16-point deficit in the first half to trail 55-47 with 7˝ minutes left in the game. That’s when Scott drove for a layup and picked up the fifth foul on the Seminoles’ Tim Pickett, who had entered the game about a minute earlier after spending much of the second half on the bench.

Scott made the free throw, and the Tigers went on a 13-3 run to lead by more than 10 the rest of the way. Pickett, Florida State’s leading scorer at 17 points a game, only scored seven points Saturday.

Olu Babalola added 15 points for the Tigers, including a backboard-shaking dunk with 4:46 left that put the Tigers up 68-50.

It was a physical game. The referees whistled 47 fouls, and called a double-foul and double-technical in the second half as players got tangled up in the lane.

Clemson benefited the most, making 20 of 27 free throws, compared to Florida State’s 14-of-24 from the line.

The Tigers have two tough road games coming up with Maryland and Wake Forest. North Carolina State then comes to Littlejohn Coliseum before Clemson ends the season at Georgia Tech.

If the Tigers win three of their last four, they will be 8-8 in the ACC. Combine that with a one loss non-conference record, and Clemson could go to the NCAA tournament for the first time since 1998.