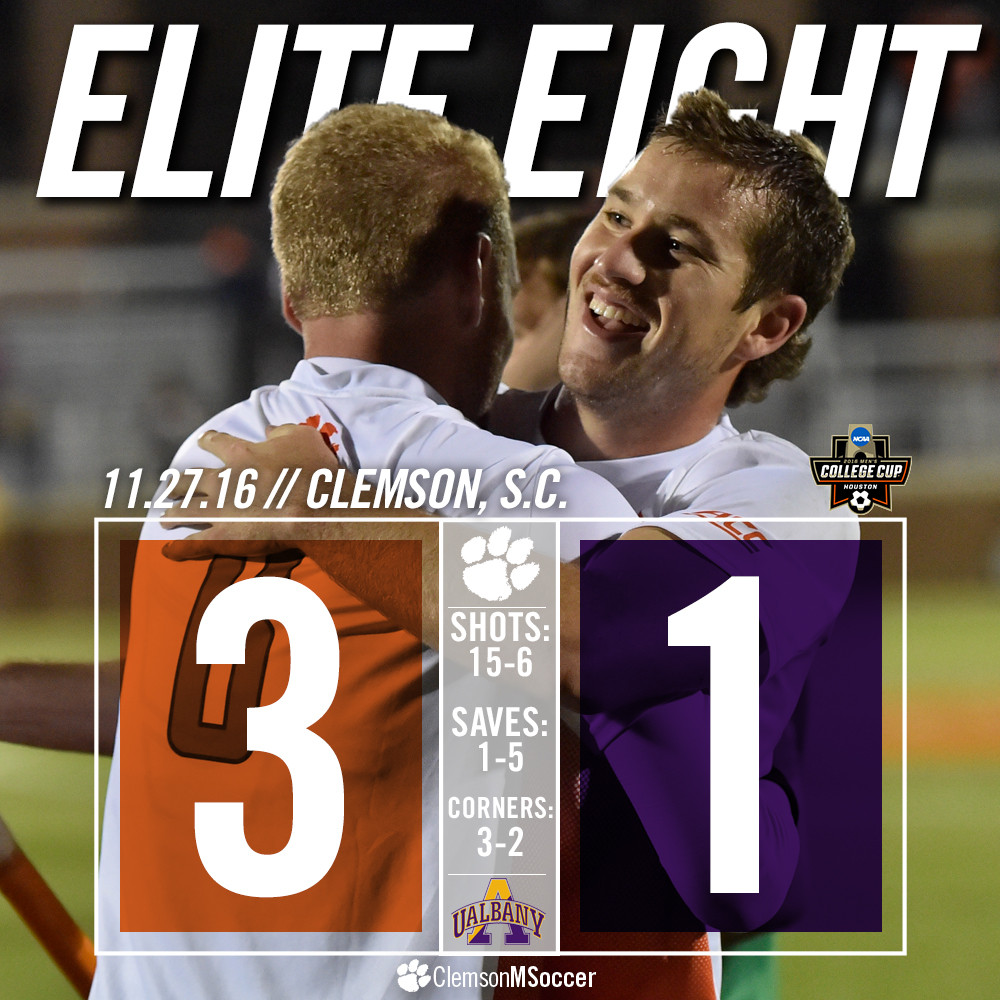 CLEMSON, S.C. – The third-ranked Clemson men’s soccer team advances to the Elite Eight for the second-straight year after defeating Albany, 3-1 at Historic Riggs Field on Sunday night. Clemson improves to (14-3-5), and Albany finishes the season (13-6-2) overall. The Tigers now turn their attention to Denver next Friday, Dec. 2 in the Elite Eight at Historic Riggs Field. The match is set to be played at 7:00 p.m.

In the first 15 minutes of play, both sides were trying to find a rhythm while play started out physical. The Tigers began to connect passes nicely, putting pressure on the Albany backline with 20 minutes left to play in the first half. With just one minute remaining in the first half, senior Austen Burnikel collected a pass from junior Oliver Shannon inside the box before turning and ripping a shot into the back of the net, giving the Tigers a 1-0 advantage heading into the break.

Albany quickly found the equalizer just two minutes into the second half when midfielder Carlos Clark was able to finish a loose ball inside the Clemson box. Despite play being physical, the first yellow card of the night was issued to Albany in the 68th-minute. In the 80th-minute Burnikel rose above the keeper for a header to find the back of the net for the second time in the match, giving Clemson a 2-1 advantage. Just three minutes later senior Alex Happi finished a ball that bounced off the crossbar to give the Tigers a 3-1 lead. Happi has scored all four of his goals this year in the postseason and in back to back games. The Tigers would hold on and now advance to the Elite Eight against Denver on Friday, Dec. 2 at 7:00 p.m.

In the match, Clemson outshot Albany 15-6, forcing Danny Vitiello of Albany into making five saves. Sophomore Ximo Miralles recorded only one save in the match and improves to (12-3-5) on the season.

The Clemson men’s soccer team returns to action this Friday, Nov. 27 at 6:00 p.m. vs. Denver in the Elite Eight. Denver defeated Washington by a score of 2-1 and have not lost a game all year.