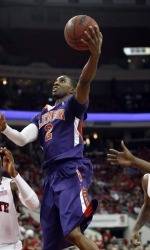 The Tigers (19-9, 8-6 Atlantic Coast Conference) had won only three of the past 20 meetings with the Demon Deacons, struggling against Wake Forest stars like Tim Duncan, Chris Paul and Josh Howard.

These Demon Deacons (8-21, 1-13), however, haven’t played anything like those groups and Clemson took full advantage.

The Tigers used a 14-2 first-half run to take control, then Stitt hit three 3-pointers in the second half to maintain the double-digit lead.

Wake Forest also had no answers for Clemson’s inside game. Forward Devin Booker added 10 points and 10 rebounds while Grant had four blocks.

Nikita Mescheriakov’s 11 points led the Demon Deacons, who shot 33 percent and were held to their second-fewest points this season.

Clemson came in hoping to improve its NCAA tournament resume and stay in the hunt for a first-round bye in the ACC tournament next month.

It’s probably a good thing selectors don’t look for style points because this victory was far from pretty.

The Tigers were outrebounded by younger, smaller Wake Forest and, minus Stitt’s three 3-pointers, were only 3 of 14 from behind the arc. Clemson’s top outside shooter, Andre Young, missed all five of his 3s and was just 1 of 9 for the game.

Still, this kept the Tigers in control of their fate. They face ACC leader, No. 1 Duke, next Wednesday before closing out the regular season at home against Virginia Tech, the club currently in fourth place just ahead of Clemson.

Wake Forest was simply seeking victory. The defeat left it 0-for-February, dropping all eight games during the month since it’s only league win against Virginia on Jan. 29.

March might not be so fruitful for the young Deacons either. They take on Georgia Tech before a final regular-season game at Boston College.

The same shooting and defense problems – Wake Forest is 10th in ACC field goal percentage and last in scoring defense – showed themselves early at Littlejohn Coliseum.

Trailing 9-8, Clemson took off on a 14-2 run as it hit four straight shots and held Wake Forest to 1-of-11 shooting while forcing three turnovers.

The Demon Deacons shot just 24.1 percent (7 of 29) in the opening period. And things could’ve been worse. The Tigers were equally cold from the outside, going 1 of 7 from 3-point range. Clemson didn’t score the final 4 minutes of the half, yet still led 33-20 at the break.