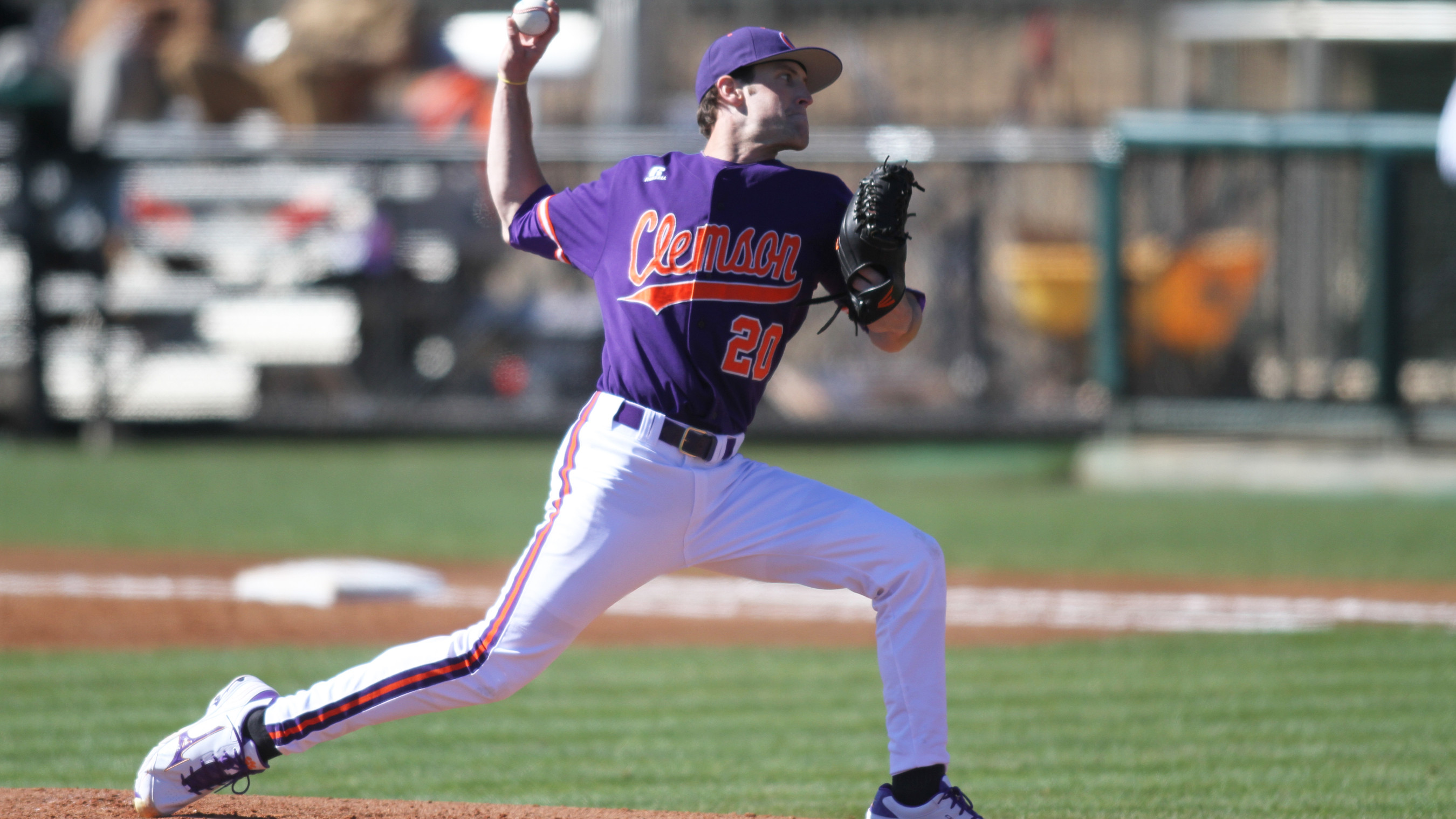 Scott Firth pitched 8.0 scoreless innings of five-hit ball and the Tigers broke the game open with five two-out runs in the seventh inning in Clemson’s 7-0 win over Wright State in front of 5,054 fans at Doug Kingsmore Stadium on Sunday afternoon.  The Tigers, who swept the series 3-0 and improved to 6-0 all-time against Wright State, upped their record to 5-1 on the season.  The Raiders fell to 3-3.

Clemson, who shut the Raiders out 6-0 in the second game of the series, recorded back-to-back shutouts for the first time since 2009, when it did so against Presbyterian College and USC Upstate on March 17,18.  It also marked the first time since 2002 (against Maine on March 21,22) that Clemson won back-to-back games by shutout against the same team.

Firth (2-0) pitched a career-long 8.0 innings to earn the victory.  The senior righthander from Buffalo Grove, IL allowed just five hits (all singles), no runs, and two walks with four strikeouts.  Firth threw just 87 pitches (57 strikes) and was aided by freshman right-fielder Steven Duggar, who threw out two runners at the plate to save runs on outfield assists.

Firth improved his career record to 13-2, as his 86.7 winning percentage moved him into fourth place in school history.  Kyle Schnell pitched a perfect ninth inning to close out the game.

Starter Robby Sexton (1-1) suffered the loss despite allowing just three hits in 5.1 innings pitched.  He did not give up a hit until the sixth inning and yielded only two runs.

In the first inning, Thomas Brittle led off with a walk and stole second.  Later in the inning with two outs, Brittle scored on a wild pitch.

The Tigers added to their lead in the sixth inning.  Duggar led off with a double to right field, Clemson’s first hit of the game, then Steve Wilkerson reached on an infield single.  Two batters later with one out, Jon McGibbon belted a 1-2 pitch off the wall in right field for a double to score Duggar.

In the seventh inning, the Tigers broke the game open with five runs.  Garrett Boulware grounded a one-out single through the right side and went to third on Brittle’s single through the right side.  Brittle was retired at third when Duggar reached on a fielder’s choice, then Wilkerson walked with two outs to load the bases.  Shane Kennedy came through with a single to right field to score Boulware and Duggar.  After McGibbon walked to reload the bases, Jay Baum laced a double over the third-base bag to score Wilkerson and Kennedy, while McGibbon also scored when catcher Garrett Gray dropped the relay throw at the plate.

Seven different Tigers had one hit apiece in Clemson’s seven-hit performance.  Kennedy and Baum both drove in two runs on their hits, while Duggar scored a game-high two runs.

Mark Fowler had two of Wright State’s five hits in the contest.  The Raiders put 39 batters on base in the series, but only scored three combined runs in the three games.

Clemson will host Winthrop at Doug Kingsmore Stadium on Tuesday at 4:00 PM.