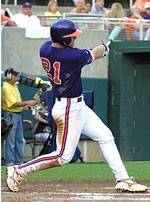 Clemson, SC – Brad McCann set career highs with six hits and six RBIs in #20 Clemson’s 19-8 victory over College of Charleston in front of 3,139 fans Wednesday night at Doug Kingsmore Stadium. The Tigers scored at least one run in seven of eight innings in their regular-season home finale. Clemson upped its record to 32-18, while College of Charleston dropped to 37-10.

Jeff Hahn, who started his first game for the Tigers since April 5, 2003, earned the win after pitching a season-high 6.0 innings. Hahn struck out four and gave up three earned runs. Zach Piccola (4-3) suffered the loss for the Cougars.

McCann, the first Tiger to top the five-hit mark this season, was 6-6 with two homers, a double, and six RBIs. It marked the first time a Clemson player had six hits in a game since Chad Phillips achieved the feat versus Maryland in 1992. He was also the eighth player in school history to total six hits in one game. McCann increased his hitting streak to 11 games and his season average to .388 as well.

For the second consecutive game, rain forced the Tigers to miss all but a few minutes of pregame batting practice. However, Clemson tallied at least 16 hits in both games. In two games versus the Cougars this season, Clemson totaled 16 extra-base hits, including eight Wednesday evening. Eight Clemson players tallied RBIs in the game, including C.J. Gaddis, who had his first career RBIs as a Tiger.

Clemson got on the board first with a run in the opening frame. Tony Sipp led off with a double, then scored on a double by McCann. Kris Harvey singled to centerfield with two outs, but McCann was thrown out at home plate.

The Tigers added eight runs in the second, similar to the 11 scored by Clemson versus Florida State on May 3. Travis Storrer walked in the first run of the inning. Then, with the bases loaded and two outs, McCann crushed an 0-2 breaking pitch to left field. The grand slam, his second this season, was the 12th homer of the year for McCann. The junior third baseman already had his career high with five RBIs through two innings of play. The Tigers loaded the bases again, and all three runs scored after the Cougars dropped what would have been the third out at the right field fence off the bat of John Ingram.

The Cougars scored two runs in the third, as Brett Gardner extended his hitting streak to 17 games. The Tigers scored one in the third as well, off an RBI single by Lou Santangelo. Garrick Evans plated the 11th Clemson run with an RBI double down the left field line. McCann extended the lead to 12-3 in the fifth with a solo home run.

Clemson put five on the board in the seventh. The first two runs came courtesy of walks to Gaddis and Tyler Colvin. Then, Brady Everett scored on a wild pitch. The final two runs came off a Russell Triplett double to left center field.

The game featured a total of 42 players, including 22 by College of Charleston, and 11 doubles. Along with McCann’s record-tying performance, Sipp, Harvey, Everett, and Andy D’Alessio all had two hits to pace the Tigers’ 19-hit performance. Four different Cougars had two hits, as the team totaled 16 in all.

The Tigers take to the road for their final six regular-season games. Clemson travels to Atlanta to face Georgia Tech in a three-game series this weekend, then to Durham next weekend to finish out ACC competition against Duke. Fox Sports Net will televise Friday (7:00 PM) and Saturday’s game versus the Yellow Jackets.