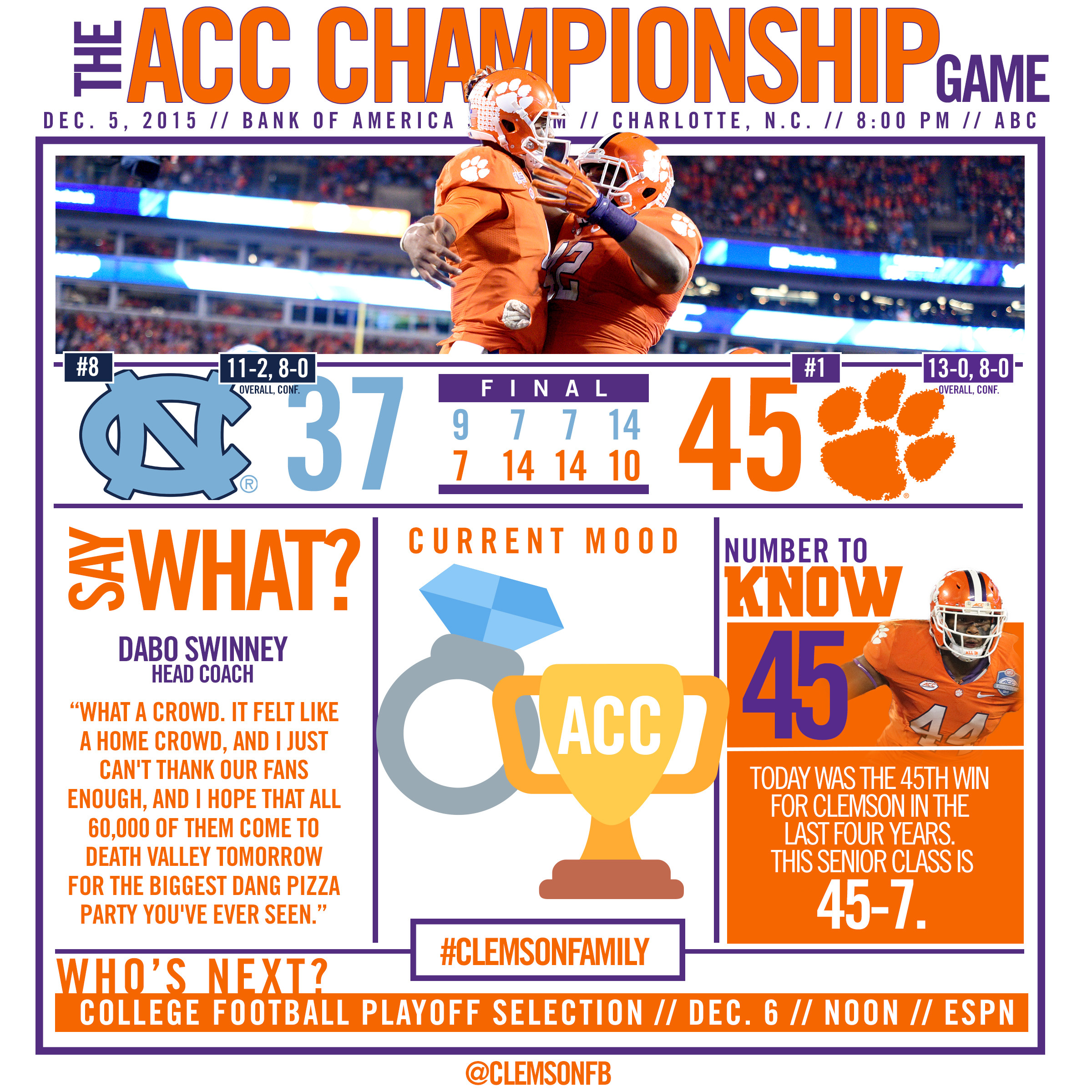 CHARLOTTE, N.C. — The top-ranked Clemson Tigers gave an ACC Championship Game record crowd of 74,514 a show on Saturday at Bank of America Stadium. Behind the dual-threat capabilities of quarterback Deshaun Watson, the Tigers won 45-37 and moved to 13-0 on the season and secured the program’s 15th ACC Championship in its history.

The lead held at 12 midway through the fourth quarter when defensive end Shaq Lawson came up with a huge forced fumble and sack that gave the Tigers possession. After tacking on a field goal, Clemson had to hang on late and recover an onside kick after the Tar Heels cut the deficit to eight points.

Watson was masterful and was named the Most Valuable Player after totaling 420 yards of total offense, an ACC Championship Game record. He accounted for five touchdowns in all, three through the air and two on the ground. Wayne Gallman rushed for 187 yards, putting him just 13 yards shy of the single-season rushing record of 1,345 set by Raymond Priester in 1996.

The Tigers amassed 608 yards of total offense and 33 first downs Saturday. The Tigers rushed for 319 and passed for 289. Defensively, UNC took advantage of short fields in the first half and finished just 12-35 passing as a team.

North Carolina held a 9-7 lead after the first quarter. T.J. Logan escaped the backfield and was left all alone for a 46-yard catch and run for a score. His score came after the Tigers had taken a 7-3 lead, also on an easy pitch-and-catch from Watson to Gallman.

Watson flipped some bad field position to open the second frame. He directed a 12-play, 96-yard drive that ended with his nine-yard rushing touchdown, his 10th on the ground this season. Deon Cain converted a key fourth down to keep the drive alive just past midfield. But UNC had an answer after Clemson failed to convert a fake punt deep in its own territory. Marquise Williams found Ryan Switzer in the end zone to put the Heels up 16-14.

Somehow, despite seven penalties including a targeting call that forced the ejection of safety T.J. Green, Clemson managed a halftime advantage of 21-16. After the defense forced the Heels to a three-and-out, Watson’s arm took over. He led the Tigers on a march downfield, converting a key third down to tight end Jordan Leggett. The two then hooked up with two seconds left before halftime on a jump pass from Watson, Leggett’s seventh score of 2015.

The Tigers came out inspired in the second half, sparked by Cordrea Tankersley’s fifth interception. His takeaway turned into points on a Gallman touchdown run. Clemson added on its next possession on a double move and tremendous catch on a 35-yard pass from Watson to Artavis Scott. His touchdown made it 35-16 in Clemson’s favor.

Clemson now awaits word from the College Football Playoff Committee on its seeding. The Tigers, ranked No. 1 in every poll so far by the committee, will find out their destination and opponent Sunday at 12 p.m. on ESPN’s selection show.