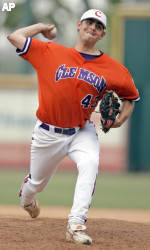 JACKSONVILLE, Fla.(AP)- Sean Clark turned in eight strong innings in his first start ever at Clemson to help lead the Tigers to an 8-4 win over North Carolina State and claim its first Atlantic Coast Conference Baseball Tournament title since 1994 on Sunday at the Baseball Grounds of Jacksonville.

The Tigers had played in the championship game five times in the past 11 years but had been forced to settle for runner-up honors each time. Clemson (47-14 and seeded No. 1 in the tournament) also finished with the best record in ACC play (24-6) during the regular season.

The Tigers will now move on to regional play where they will serve as one of 16 hosts in the NCAA post-season tournament starting Friday.

There was speculation as to how sharp Clemson would be after the Tigers had to be back out on the field less than 12 hours from the 1:30 a.m. completion of their 16-11 semifinal game win over Georgia Tech. But the Tigers played error-free ball, knocked out ten hits and other than a late letdown in the ninth inning when NC State scored four times, played in total control.

The surprise of the day was the performance by Clark, a last-minute addition to Clemson’s tournament roster after starting outfielder Travis Storrer injured an ankle in the final game of the regular season. Clark, a junior by eligibility who has already graduated with a degree in economics, had appeared in just seven games this year, all in relief, and had only thrown 10 1/3 innings in those seven games.

He nearly matched that total on Sunday, pitching eight innings and facing one batter in the ninth before he was relieved. He allowed just one run, four hits, one walk and had five strikeouts to earn a berth on the all-tournament team.

“Sean has always intrigued us and has worked hard this year,” Clemson coach Jack Leggett said. “The last time out he pitched well and I thought then that maybe we were missing out on something. I think the players have confidence in him too. He just seemed like the right person to give an opportunity to and he took advantage of it and did a great job for us.”

Clark was sharp from the start. He retired the first seven batters before Caleb Mangum lined a single to center in the third inning. Clark didn’t have a three-ball count on a batter until two out in the fifth inning when he issued his only walk of the game.

“I never dreamed this up. I just wanted to go out there and give my team a chance to win,” said Clark who missed the entire 2005 season following shoulder surgery the previous fall. “I never had a chance to be nervous because I didn’t find out I was starting until coach told me as we were getting on the bus to come to the ball park. I felt if I got through three, four or five innings, that would be fine with me, as long as we were in the game. It turned out to be better than that, and all the things that come with it are unbelievable.”

Offensively the Tigers gave Clark support with a pair of four-run innings to score all of their runs. They pushed across the first four-spot in the fourth inning on just two hits but were benefited by two costly errors by North Carolina State third baseman Matt Mangini.that allowed a pair of runs. The other two runs came on successive bases-loaded walks to Brad Chalk and Marquez Smith.

Clemson doubled their lead in the seventh inning with Tyler Colvin delivering the key hit, a two-run single. Colvin, who stretched his hitting streak to 20 consecutive games, was named the Tournament’s MVP.

North Carolina State (38-21) avoided a shutout with a four-run rally in the bottom of the ninth inning. The Wolfpack collected four hits, including a two-run single by Jonathan Diaz. When Matt Camp doubled down the right field line to bring home the fourth run, it brought the tying run to the on-deck circle.

But Clemson reliever P.J. Zocchi, the starter and winner in the Tigers first tournament game on Wednesday, came in and struck out Ramon Corona on three pitches to end the game.