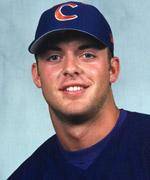 Clemson, SC – Clemson extended its winning streak to seven games after defeating Tennessee Tech 8-0 Wednesday afternoon at Doug Kingsmore Stadium. It marked the fourth shutout of the young season for Clemson. The 18th-ranked Tigers improved to 10-3 on the season, while the Golden Eagles fell to 5-7.

Kris Harvey (2-0) earned the win for the Tigers after pitching 6.0 innings, while giving up just two hits. Brian Driskell (0-2) was credited with the loss after giving up four earned runs off of eight hits in 3.2 innings of work.

Brad McCann went 3-for-4 and drove in two runs to lead the Tiger offense. Zane Green, who entered the game with a team-best .353 batting average, also had three hits in the contest. The Tigers had 15 hits on the afternoon, tying the season high.

Clemson got on the board in the first inning after McCann knocked a double down the left field line to plate Zane Green. McCann has now gone 9-for-18 with ten RBIs over the last five games. The Tigers extended the lead to 2-1 after Green singled home Jeff Hourigan in the second.

The Tigers tacked on two runs in the third after Valiente hit a two-run single with a full count. The sophomore left fielder broke out of an 0-for-12 slump with two hits and two RBIs.

Clemson added another run in the fourth after Russell Triplett scored on consecutive balks. The balks occurred as Driskell was attempting to intentionally walk Tiger first baseman Michael Johnson. Driskell threw two wild pitches in addition to three balks. Golden Eagle pitchers threw four balks in the game, one more than it had all season entering the game.