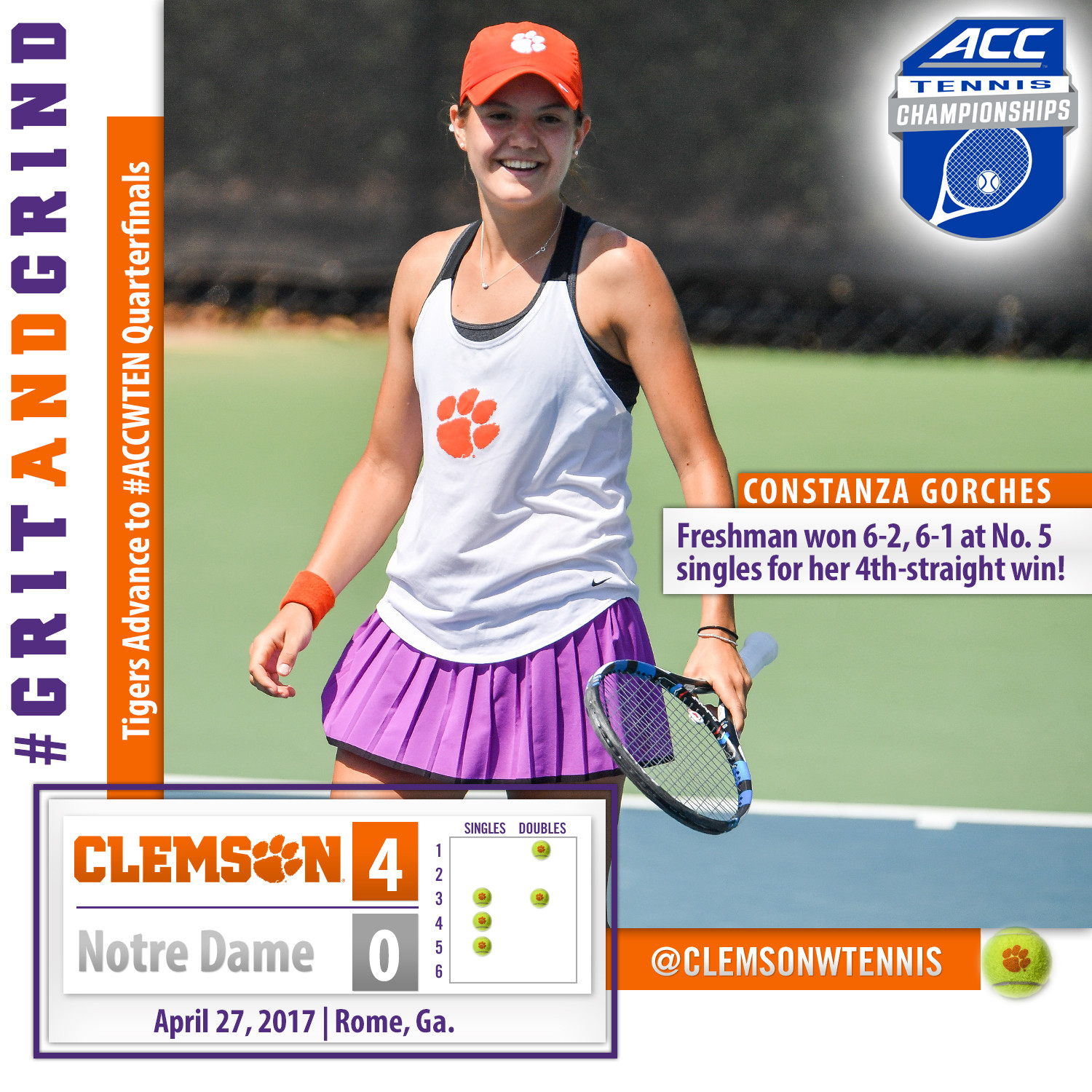 ROME, Ga. – The No. 7-seed Clemson women’s tennis team blanked No. 10-seed Notre Dame 4-0 in the second round of the 2017 ACC Championships on Thursday evening in Rome, Ga. It was the second time in five days that the Tigers defeated the Irish. With the win, 39th-ranked Clemson improved to 13-11 overall, while 33rd-ranked Notre Dame dropped to 16-9.

With the win over the Irish, Clemson advances to the ACC Quarterfinals to face No. 2-seed Duke. The Tigers and Blue Devils square off at 4 p.m. on Friday, April 28 at the Rome Tennis Center.

Fresh off their All-ACC Second Team awards earlier in the day, sophomores Ayan Broomfield and Marie-Alexandre Leduc got the Tigers off to a great start with a 6-1 win at No. 1 doubles. Sophomore Fernanda Navarro and junior Daniela Ruiz clinched the doubles point to put the Tigers up 1-0, winning 6-4 at No. 3. Broomfield and Leduc have won six doubles matches in a row and are 20-4 on the season, and Navarro and Ruiz have won 10 straight and are 14-1 as a doubles duo.

In singles play, freshman Constanza Gorches rolled to a 6-2, 6-1 victory over her Notre Dame opponent at No. 5, followed by Navarro, with a 6-4, 6-1 win at No. 3. Gorches has now won four consecutive singles matches, and Navarro has won six in a row. Freshman Sydney Riley clinched the victory for Clemson on Court 4, winning 6-4, 6-2. Leduc was leading 87th-ranked Monica Robinson 7-6(5), 2-3, when the match was abandoned, and Broomfield was up 7-6(3), 2-0 over Brooke Broda, after trailing 2-5 in the first set.