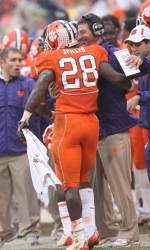 Clemson, SC – Clemson will face five 2008 bowl teams on the road during its 2009 football schedule announced Thursday by the Atlantic Coast Conference. The Tigers will have seven home games and five on the road in Dabo Swinney’s first full season as head coach.

Clemson will travel to Georgia Tech, Maryland, Miami (FL), NC State and South Carolina during the 2009 season and those teams combined for 37 wins last year. Clemson is slated to play nine bowl teams overall during 2009.

“This will be a challenging schedule,” said Clemson Head Coach Dabo Swinney. “The ACC was the most balanced and competitive league in the country last year top to bottom with 10 of the 12 teams going to bowl games. It will be just as competitive this year. Seven of our eight league opponents went to bowl games last year and Virginia, will be much improved with the return of the quarterback who led them to nine wins in 2007.

“You like to get the season off to a good start, but we will be challenged from the beginning with an opener against a Middle Tennessee team that beat Maryland last year and our first ACC game is at Georgia Tech on a Thursday night so we will have a short turnaround to prepare for their option offense.

“I do like the position of our open date (October 10) in that it is close to the middle of the season, and I do like the fact that we never have back to back road games.”

Clemson will open the season on September 5 against Middle Tennessee, the latest start to the season on the calendar since 1998. Middle Tennessee defeated Maryland last year, 24-17, and suffered a narrow 23-21 defeat to a nine-win Virginia team in 2007. Rick Stockstill, the head coach for Middle Tennessee, served as an assistant coach at Clemson from 1989-2002 when he served under four different head coaches, the only assistant coach to serve under four different Clemson head coaches. He was replaced on the Clemson staff in 2003 by Dabo Swinney.

Clemson opens its ACC slate at Georgia Tech on Thursday night, September 10 in a game that will be televised nationally in ESPN. Georgia Tech was Tommy Bowden. Fourteen of the last 19 games in the series have been decided by a touchdown or less.

Boston College will travel to Clemson on September 19 for the Tigers first ACC home game. The September 19 date is the third winningest date in Clemson history on a percentage basis (8-1) and the game will be played on the 67-year anniversary of the opening of Clemson Memorial Stadium. The Tigers defeated the Eagles in Boston last year 27-21, Clemson’s first win over Boston College in 50 years. The two teams will play for the McFadden-O’Rourke Trophy for the second time and the most valuable player of the game will be presented the “Leather Helmet Award.” C. J. Spiller won the honor last year when he gained 242 all-purpose running yards.

Clemson is scheduled to play a non-conference game against Central Michigan on September 26, then will travel to Maryland for an October 3 contest. Clemson has won each of its last two games at Maryland. After an open date, Wake Forest comes to Clemson on October 17. Clemson has won each of the last four meetings with the Demon Deacons at Clemson.

The Tigers have four games in November, three against ACC teams, two of which are Atlantic Division rivals. Florida State comes to Clemson on November 7. The Seminoles won last year’s meeting in Tallahassee, but they have lost three straight to the Tigers in Memorial Stadium by a total of 43 points.

Clemson travels to North Carolina State on November 14. The Tigers have won four in a row in the series for the first time since the 1981-85 era. Clemson rounds out its ACC schedule on November 21 against Virginia on Senior Day at Memorial Stadium. It will be the first time Virginia has been the “Senior Day” opponent since 1993 when the Tigers upset a top 20 Virginia team 23-14.

The regular season will close on November 28 in Columbia, SC when the Tigers face South Carolina. Clemson has won 10 of the last 12 in the series overall and nine of the last 10 played in Columbia dating to 1988.

All special home game designations such as homecoming and parents’ day will be announced at a later date.