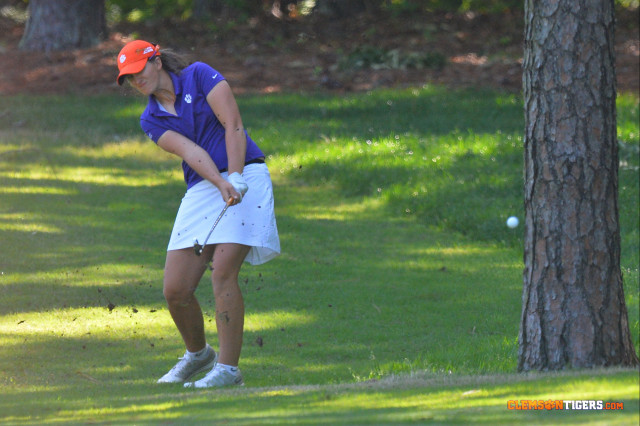 Clemson, S.C.—It was a blustery day at English Turn Golf and Country Club on Monday and the scores reflected it at the All-state Sugar Bowl Women’s Golf Tournament. Clemson was one of 14 teams that failed to break 300 as a team score as winds affected performances all day. Only five of the 90 players in the field broke par.

The 17-team field includes 10 of the top 25 teams in the nation. Clemson had a team score of 311 on Monday and stands at 35-over-par 611 entering Tuesday’s final round.     Clemson is in 14th place entering the final round, but stands just 10 shots out of eighth place.

Sydney Legacy led the way with a 77 on Monday as she shot a one-over-par 37 on the front nine, her second nine of the day. The senior from Lexington, SC stands at eight-over-par in 37th place entering the final round.

Alice Hewson is Clemson’s top golfer for the first 36 holes with a six-over-par count of 150 after rounds of 71 and 79. The junior All-ACC golfer stands in 26th place.

Ana Paula Valdes had a 78 on Monday, second best among the Tigers. Her round included a pair of birdies.   Marisa Messana had a second round 80 after an opening round 74 and freshman Callista Rice shot an 81

The final round on the par 72 course will begin Tuesday morning. Live stats are available on golfstat.com.