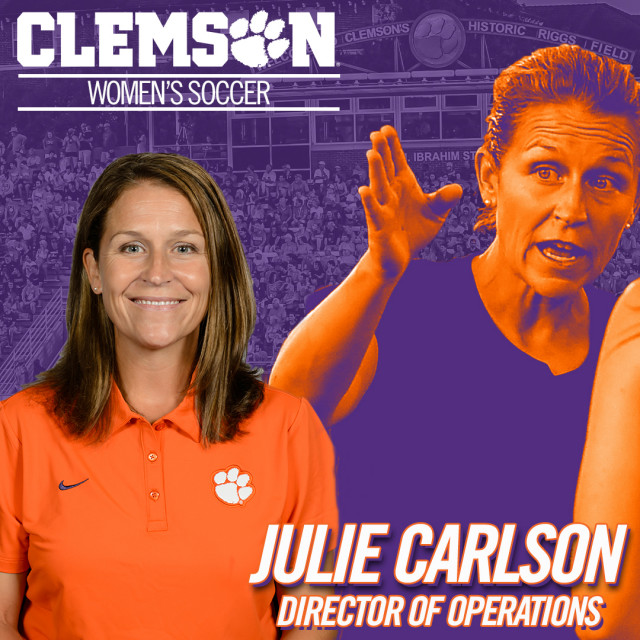 CLEMSON, S.C. – Clemson women’s soccer head coach Eddie Radwanski announced the hiring of Julie Carlson as the program’s Director of Soccer Operations on Friday. Carlson previously served as a volunteer assistant coach for the Tigers from 2014-16.

“We are excited to welcome Julie back to the Clemson Family! Being able to add someone to our staff who has head coaching experience, as well as her overall background in the game, will only make our program better,” said Radwanski. “Julie knows most of our players from her camp experience, so the transition period will be minimal. I’m thankful Julie was interested in this position and very excited she is back with us. Her qualities and abilities will really help our program.

Carlson served as the head coach of the Anderson University women’s soccer program the last two years, during which time she was also the university’s Senior Women Administrator. Her soccer teams recorded a 15-15-4 overall record in two seasons, and an 11-9-1 record in the South Atlantic Conference play, while making a pair of appearances in the semifinals of the SAC Tournament. Over the past two seasons under her direction, the Trojans earned an All-America selection, two All-Southeast Region honorees and seven All-SAC award winners, while four players were named to conference all-tournament teams.

Prior to her arrival at Anderson, Carlson spent two seasons as a volunteer assistant coach at Clemson, during which time the Tigers notched 27 wins and back-to-back appearances in the NCAA Tournament, including the program’s first national tournament appearance since 2007. The 2015 season saw the Tigers finish with a 14-4-2 record, a second-place finish in the ACC regular season standings, the program’s most successful regular season since 2002.

“I am extremely excited to return to Clemson University and the Clemson Family, and to be competing in the best women’s soccer conference in the country,” said Carlson. “There has been so much growth in the women’s soccer program and I am honored to be a part of the continued success and determination to win championships. I would like to thank Eddie Radwanski for this wonderful opportunity, as I am truly honored and humbled to be a part of a great team of talented players and talented coaches.”

From 2013-15, Carlson also served as the Director of Coaching for the Clemson Anderson Soccer Alliance, during which time she managed and oversaw the day-to-day operations for the entire club. From 2005-13, Carlson spent eight seasons as the head coach at Jacksonville State, after building the Virginia Military Institute women’s soccer program from scratch in 2002, and serving as that program’s head coach from 2002-05.

Carlson earned her bachelor’s degree in Psychology from Wright State in 1995. She graduated from VCU in 2008 with a master’s degree in Sports Leadership with an emphasis in Parks & Recreation. She also holds a USSF A Coaching License and an NSCAA Premier Diploma.

“I’d like to thank Manuel Garcia-Oronoz for his great service to Clemson women’s soccer. It is a fantastic opportunity for him to join the staff of Atlanta United of the MLS, and I’m very excited and happy for him with his future.”