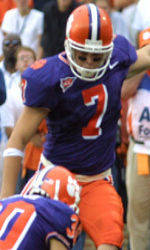 Southern California all-purpose player Reggie Bush and national sack leader Elvis Dumervil of Louisville highlight Brentson Buckner’s 2005 All-America team. Buckner, a starting defensive tackle for the Carolina Panthers, is the only active NFL player who has a vote in the Harris Interactive poll that will help determine the teams that will compete in the four BCS Bowls this year.

He has released his ballot each week throughout the season on his internet site, brentsonbuckner.com and this week released his 2005 All-America team.

Two Clemson players were named to the first team, cornerback Tye Hill and kicker Jad Dean. Hill is a finalist for the Jim Thorpe Award, which is presented to the nation’s top defensive back and Dean is a finalist for the Lou Groza Award, which is given to the nation’s top placekicker. Hill leads Clemson’s 16th ranked scoring defense in passes defensed with 10, while Dean is second in the nation in field goals per game with 22. Both will be in Orlando, FL on December 8 for the ESPN College Football Awards Show.

Bush was named the first-team all-purpose player and was Buckner’s national player of the year.Buckner named Penn State Coach Joe Paterno his National Coach of the Year. “There were a lot of candidates, but Joe Pa stands out. He had everyone on his back for the last five years it seemed, but he stayed the course from a hard work standpoint. He might have made some changes in his approach to the offense and in recruiting, but give the man his due. Now he is one upset away on Saturday from getting into the National Championship game.”

Buckner, now in his 12th season with the Panthers and one of the reasons Carolina is challenging for the best record in the NFC, selected 29 players from 25 different teams. Notre Dame, Minnesota, Maryland and Clemson all had two players apiece. The ACC had eight players, followed by the Pac-10 with six and the Big 10 with five. Overall, eight different conferences were represented on the team.