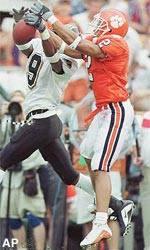 Brian Mance To Be Guest On Tiger Bytes

CLEMSON, S.C. – Sophomore cornerback Brian Mance will be the next player guest on Tiger Bytes, Clemson’s weekly online show. Fans can e-mail questions to Mance for the show that can be heard live every Thursday at noon on Clemson’s official athletic web site, ClemsonTigers.com. Click on the link above to e-mail a question and for more information.

Mance had a very productive 16 plays of action against Missouri in the second game of the season. For those 16 plays, Mance had two interceptions and a fumble recovery. In addition to those three takeaways, he also had four tackles and two passes broken up. He also contributed a 28-yard punt return on special teams in the fourth quarter, second longest punt return by a Tiger under Tommy Bowden.

Mance, a backup cornerback in the Missouri game, became just the seventh Clemson player in history to have three takeaways in the same game. He was the first to do it since Brian Dawkins had three interceptions against Duke in 1995.