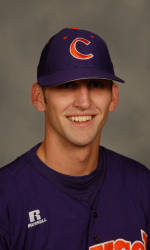 Mike Belfiore hit two homers and drove in seven runs to lead Boston College to a 13-1 win over #20 Clemson in front of 712 fans at Eddie Pellagrini Diamond on Friday afternoon. The Eagles, who took a 1-0 series lead, improved to 15-7 overall and 5-3 in the ACC. The Tigers fell to 16-7 overall and 5-5 in the ACC.

The Eagles scored four runs apiece in the first, second, and sixth innings and never looked back. Boston College also scored 11 of its runs on four home runs, including a grand slam and three-run homer off the bat of Belfiore during the first two innings. Tony Sanchez added a three-run homer and run-scoring single as well for the Eagles, who outhit Clemson 13-7 and only left two runners on base.

After the Tigers stranded two runners on base in the top of the first inning, the Eagles scored four runs in the bottom of the first. Leadoff batter Robbie Anston led off with a hit-by-pitch and advanced to second on Matt Hamlet’s sacrifice bunt. Sanchez followed with a walk and Mickey Wiswall loaded the bases with another hit-by-pitch. Belfiore then hit a grand slam to center on a 3-1 pitch. It was also the first hit against the Tigers with the bases loaded in 2009, as their opponents entered the game 0-for-13 in that situation.

In the second inning, the Eagles doubled their lead with four more runs. Anston lined a one-out single to left and advanced to second on Hamlet’s walk. Sanchez followed with a single through the left side to score Anston. Two batters later with two outs, Belfiore hit another 3-1 pitch over the fence for a homer, this time an opposite-field shot to right field. It was his second homer of the game and third of the season.

After three scoreless innings, Boston College scored four runs in the sixth inning. Mike Sudol led off with a double over the first-base bag. Two batters later, Anston laced a single up the middle to plate Sudol. After Hamlet singled through the left side, Sanchez blasted a three-run homer to left, his sixth long ball of the season.

The Tigers dented the scoreboard in the top of the eighth inning. Ben Paulsen hit a two-out triple down the right-field line and scored on Matt Sanders’ line-drive single to right.

In the bottom of the eighth inning, pinch-hitter John Spatola hit a solo homer to right field. It was his first home run of the season.

Seven different Tigers had one hit apiece. Paulsen had Clemson’s lone extra-base hit and scored its only run. The Tigers stranded 10 runners on base as well.

Clemson and Boston College will wrap up the series with a doubleheader on Saturday at Eddie Pellagrini Diamond beginning at 11:00 AM. Both games will be nine-inning contests and the series-finale will begin approximately 30 minutes after the conclusion of the first game on Saturday.