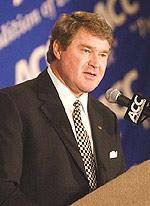 Boston College University has accepted an offer to join the Atlantic Coast Conference starting with the 2004-05 academic year. The ACC will hold a press conference on Friday, October 17, 2003 at 12:00 EDT to formally announce the conference’s expansion to 12 schools.

(Brought to you by OCSN’s College Sports Pass)

For more on the Atlantic Coast Conference’s expansion please click the links below:

Quotes Regarding Boston College’s Acceptance to the Atlantic Coast Conference

“An 11-team league can work, but does it work in the best way you would like to it to work from a number of different angles? We found the answer to that to be no. It became evident over the summer that was some continued interest on both parties part.”

“It’s almost like a suit, you put it on and wear it for a while and then you decide it needs some alterations. We began to envision ourselves in the summer as one sized league and we felt an adjustment would be wise to position us for the future.”

“The ACC is a strong, stable conference. The move to the ACC will generate greater revenues in the future.”