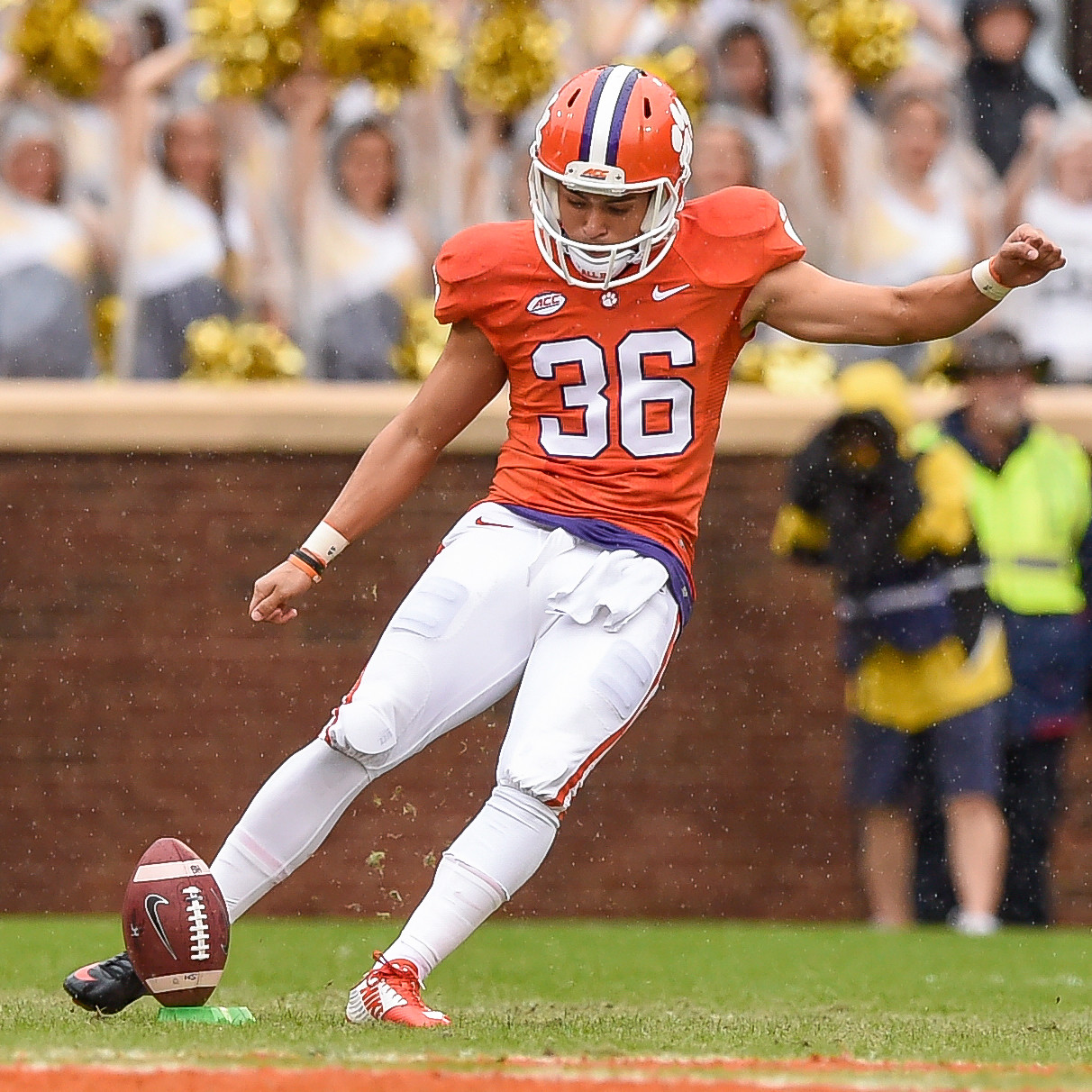 Senior kicker Ammon Lakip wasn’t born a football player. In fact, he grew up in a soccer-loving household. From the time he was able to walk, he was kicking a soccer ball. Lakip got his love for the game from many of his family members.

“My grandfather played (soccer) in Colombia in a semi-professional league,” said #36. “My uncles also played and so did my brother. I played center midfielder my whole life. I was practically born into it.”

As a youngster, Lakip always had dreams of playing soccer at the college level. However, when he got the opportunity to play soccer at Clemson on a half scholarship, injury forced him to look in a different direction.

“I got injured a lot,” he admitted. “I rolled my ankles more than an athlete should. I am probably the only college kicker who tapes his ankles every game.

“I got hurt the summer going into my senior year of high school. I was sick of getting injured all the time, so I played my last tournament that summer and turned my focus to football.”

Lakip never set out to play high school football, but he was approached to complement the team after its only kicker graduated.

“I was best friends with the kicker’s younger brother, so when the kicker graduated, they didn’t have a kicker on the team anymore. My friend approached me and said that I should come out for kicker because of my soccer experience.”

“I grew up watching Mark Buchholz play soccer for the Tigers. He also went to my high school. He played soccer with my brother and I used to be a ballboy for their team throughout middle school.

“I watched Mark and followed his career at Clemson. I heard he kicked for the football team as well as being a starter on the soccer team.”

Buchholz also helped Lakip get his foot in the door at Clemson.

“I talked to Mark about coming to Clemson, and then he talked to coach (Dabo) Swinney about me and my family. Coach called me two weeks before signing day, so I didn’t go through the typical recruiting process.”

At the time Lakip signed, a young Chandler Catanzaro needed someone to test his abilities every day at practice.

“Coach Swinney said he wanted to bring in someone to challenge Chandler (Catanzaro),” said Lakip. “I came in and was an extremely raw kicker with barely any experience.”

Going head-to-head with Catanzaro shaped Lakip’s experience as a new kicker. He also credited other specialists, Spencer Benton and Dawson Zimmerman, with helping get his mind in the right place as a kicker.

“We had such great leaders with our kickers and punters when I came in…Dawson Zimmerman, Spencer Benton, Chandler Catanzaro. They all did a lot for me, especially showing me how to act as a specialist.

“There is a certain charisma that comes with the job. You can’t take yourself too seriously and you have to embrace the role.”

Unfortunately for specialists, they are often victims of negative comments after a loss. During the 2014 season, Lakip missed an important kick at Florida State, and the unfavorable comments poured into his inbox. However, Lakip believes those kind of comments come with the job.

“Getting negative comments is part of the position and part of people investing in our team and university. It’s not fun, but it shows that people care about the team.”

Lakip showed his mental toughness by finishing the season 21-28 on field goals. He started all 13 games and scored a team-high 106 points. He came back from the misses at Florida State and had a streak of 13 made field goals in a row at one point. He also tied the record for multiple field goal games in a season with eight and tied for 13th in the nation in field goals per game (1.6). He finished fifth in the ACC in scoring as well.

At the conclusion of the season, Lakip was one of 20 semifinalists for the Lou Groza award, given annually to the best placekicker in the nation.

In the victory over No. 6 Notre Dame at Memorial Stadium on October 3, Lakip showed that he was more than just a soccer player. On the opening kickoff of the second half, he ran downfield and knocked the ball loose from Notre Dame returner C.J. Sanders. The Tigers recovered and went on to score a touchdown on the ensuing drive, giving Clemson a 21-3 lead.

“It was textbook form,” Swinney said with a smile after the game. “We practice that with the kickers, but it is rare to see a kicker do that in a game.”

It is certainly rare, as it was the first fumble caused by a Tiger kicker since Spencer Benton did it against Wake Forest in 2011.

After each game, the Tiger coaching staff presents the “Beaver Award” to the player who forces the first turnover of a game. Lakip was presented the award the Monday after the game and was the first Clemson kicker to win the honor.

Lakip showed faith in what he had learned from his coaches in making that big hit against the Fighting Irish. An event that did test Lakip’s faith in life took place when his mother suffered a stroke in 2012.

“My mom had a stroke after trying to save my younger cousin from drowning. He was caught in a rip tide, and my mom can’t swim, but she wouldn’t let him go…she had to try and save him. She ended up almost drowning, and two days later had a stroke.

“My sister and I were in the house with my mom when she had her stroke and had to get her to the hospital. She almost died, but now she is great and my biggest fan. I look at my mom as a figure of strength in my life.”

The strength Lakip gets from his mother has propelled him through his four years at Clemson. He is proud to be a part of one of the most prominent universities in the country.

“It has been really gratifying to watch this university grow and become more and more successful. The culture has changed so much since I arrived, and I am happy to be a part of it. It is great to be able to help change something as big as Clemson.”