The history of the Clemson vs. Furman series dates to the first game in Tiger history on Oct. 31, 1896. Given that fact and the relative geography (schools separated by 28 miles), it only makes sense that there have been a few coaches who have ties to both schools.

Two of those coaches are Bob Smith and Robbie Caldwell. While it happened about 35 years apart, I was truly blessed to work with both of them.

Smith was a three-sport star at Furman, as he was a standout in football, basketball and baseball. During his senior year, he was the captain of the football and basketball teams, and he was a two-time all-state performer in both sports.

In 1950, Frank Howard convinced Smith to come to Clemson to serve as line coach. He stayed on Howard’s staff for 20 years until the legend retired after the 1969 season.

During the 1950s, Clemson had the 15th-highest winning percentage in the nation, won three conference titles, went to five bowl games and finished in the final top 25 of at least one poll six times. The Tigers won three more ACC titles in the 1960s.

From 1952-57, Smith served as Clemson’s head baseball coach. In 1954, he led Clemson to its first ACC title in any sport, and he became the first Tiger coach to be named ACC Coach-of-the-Year.

When Howard retired after the 1969 season, Smith went into athletic administration and made huge contributions to the infrastructure of the department by supervising the development of Jervey Meadows.

Smith retired in Clemson with his wife, Catherine, the first female mayor of Clemson, and his daughter, Sandy, who served Clemson students for many years at Redfern Health Center. Smith died on Sept. 5, 1994, just two days after a Clemson vs. Furman football game.

About the time Smith was retiring from Clemson, Caldwell was beginning his career as a coach. He had been a three-year letterman on the gridiron at Furman from 1973-75. Regarded as one of the top offensive linemen in Paladin history, he was named MVP of the team as a senior in 1975. He is still the only center in Furman history to receive that honor.

Caldwell was named offensive line coach in 1978 under first-year Head Coach Dick Sheridan and was instrumental in the Paladins winning six SoCon titles. His career at Furman culminated with a 12-2 record and national runner-up finish in 1985. He coached 18 All-SoCon performers, including current Furman Head Coach Clay Hendrix.

Prior to the 1986 season, Caldwell accompanied Sheridan to NC State, where he coached the Wolfpack offensive linemen for 14 seasons. He then joined Bobby Johnson at Vanderbilt in 2002. Much to the delight of the media because of his colorful quotes, Caldwell became the interim head coach at Vanderbilt in 2010.

Caldwell came to Clemson in 2011, and in his 11 years as offensive linemen coach, the Tigers never won less than 10 games. It is the third-longest streak of its kind in history. The Tigers won two national titles, seven ACC championships, including six in a row, and made the College Football Playoffs six times.

The native of Pageland, S.C. coached 17 different players who were named All-ACC a total of 27 times. Eight of his former Tigers went on to NFL rosters, including Tremayne Anchrum, who won a Super Bowl championship ring with the Rams last season.

The coaching connections relationship between the two schools has actually worked both ways. Johnson, a 1972 Clemson graduate, led the Furman program to greatness from 1994-01, including an appearance in the FCS National Championship Game in 2001.

Any way you look at it, the football heritage of both schools has benefited from the Tiger/Paladin relationship that all started in 1896. 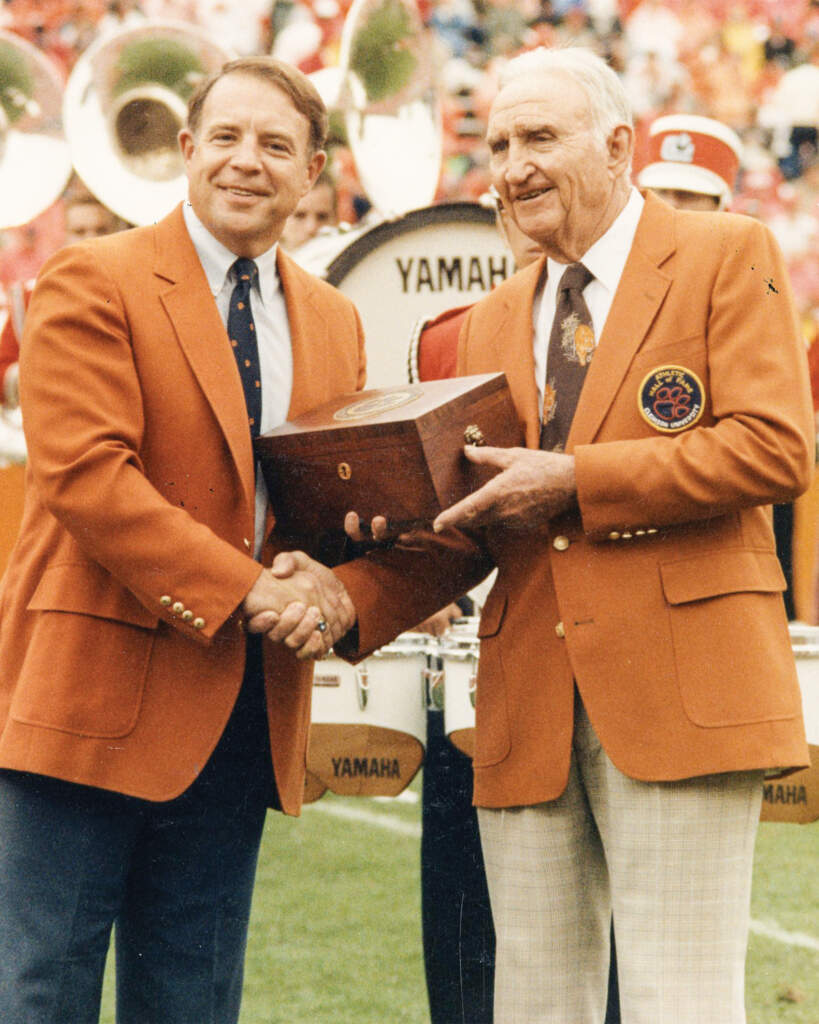