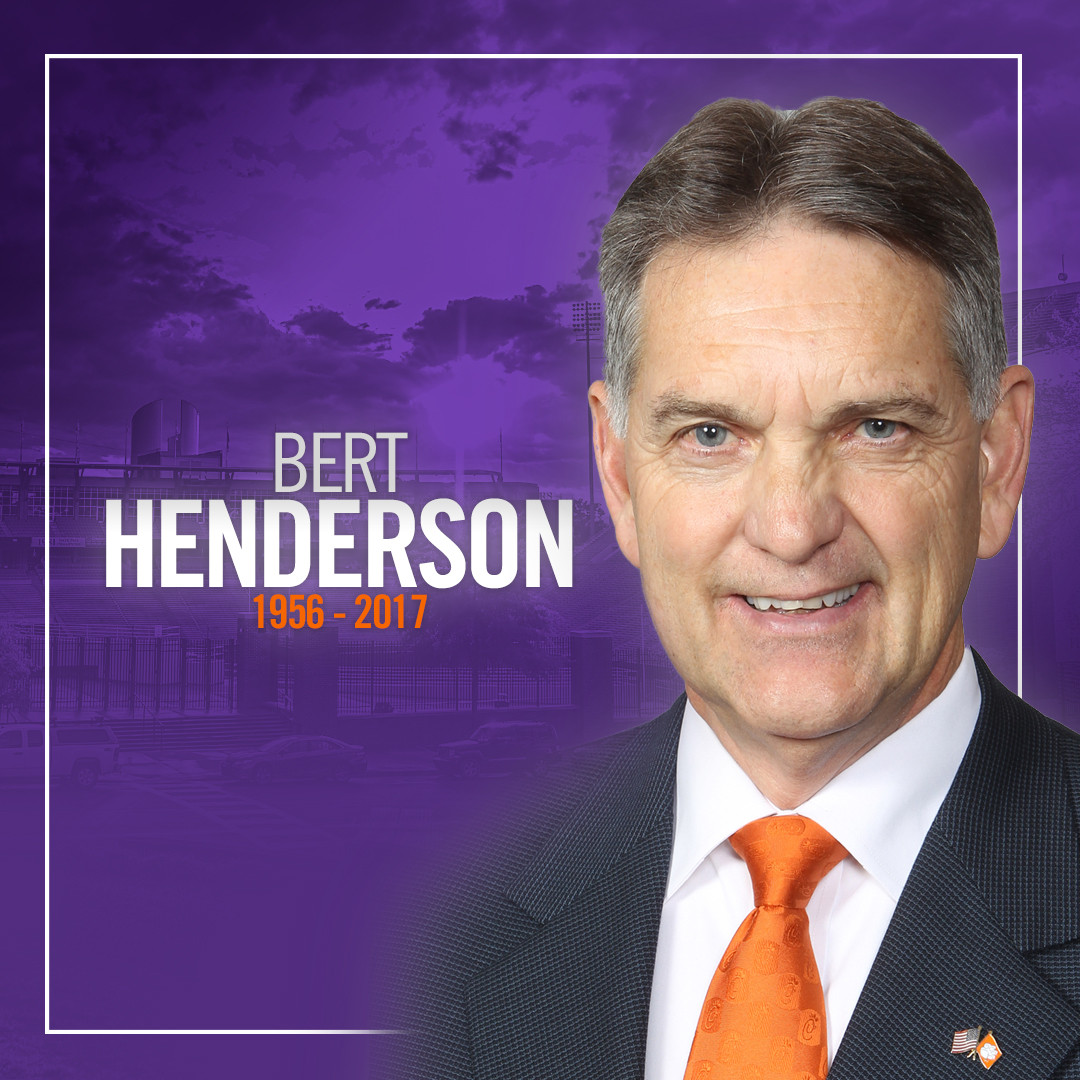 Clemson Associate AD / Director of IPTAY Planned Giving Bert Henderson, 60, was found dead Tuesday morning, according to Pickens County Sheriff Rick Clark. An investigation by the coroner’s office has begun, and their office will provide any further information as it becomes available.

Bert Henderson’s Clemson career began in 1978 as an athletic trainer and throughout his time at Clemson he became comfortable in any role, from wrapping ankles to raising money for IPTAY. Before officially beginning his administrative career, Henderson served as a trainer on Clemson football’s 1981 national championship team.

His administrative tenure at Clemson began when he served as business manager and trainer for Bill Foster’s basketball teams (1982-1984). In 1984, he moved to Clemson’s Alumni Center as a field agent. While there, he set up visiting team headquarters, and managed Clemson Alumni and Clemson Club meetings. In addition, he initiated the umbrella structure for which all alumni and athletic activities take place. In 1985, he became IPTAY’s first Associate Executive Director.

In 2004, Henderson became IPTAY’s Executive Director. He provided new opportunities with IPTAY’s annual giving levels, establishing the Heisman level at $10,000 annually and securing 100 donors in the first year of 2005. Later he established the McFadden level and the Howard level to allow donors to move up from within, while helping the growth of IPTAY.

Henderson enhanced and developed the bar code data system for IPTAY, restructured the priority points system in 2001, and helped the technical communication of the database. He has secured numerous naming opportunities and endowments. Dean and Ann Coleman honored him in 2001 when they endowed a trainer’s position in his name.

His duties at IPTAY included coordinating planned giving for Clemson University athletics, wherein Henderson worked with donors to help establish the best method to provide gifts to Clemson athletics’ future. Bequests, trusts, endowments and other financial tools were also a part of gift and estate planning. He also worked with Clemson University and the Clemson Athletic Capital Campaign offices to secure the best procedures for donors and Clemson’s future for all capital gifts.

Henderson graduated from Mars Hill College in 1978 with a bachelor’s degree in physical education and health. He earned a master’s of education in administration and supervision from Clemson in 1980. Henderson served as an instructor in the education department for 12 years. He was also a co-host of the Tiger Tailgate Show for four years and was professionally associated with the National Society of Fundraising Executives, Tiger Brotherhood, and is a South Carolina State Constable. His wife of 32 years, Lee Ann Hudson, passed away in November 2016. He is survived by two daughters, Amy Lee and Kimberly, who both graduated from Clemson.