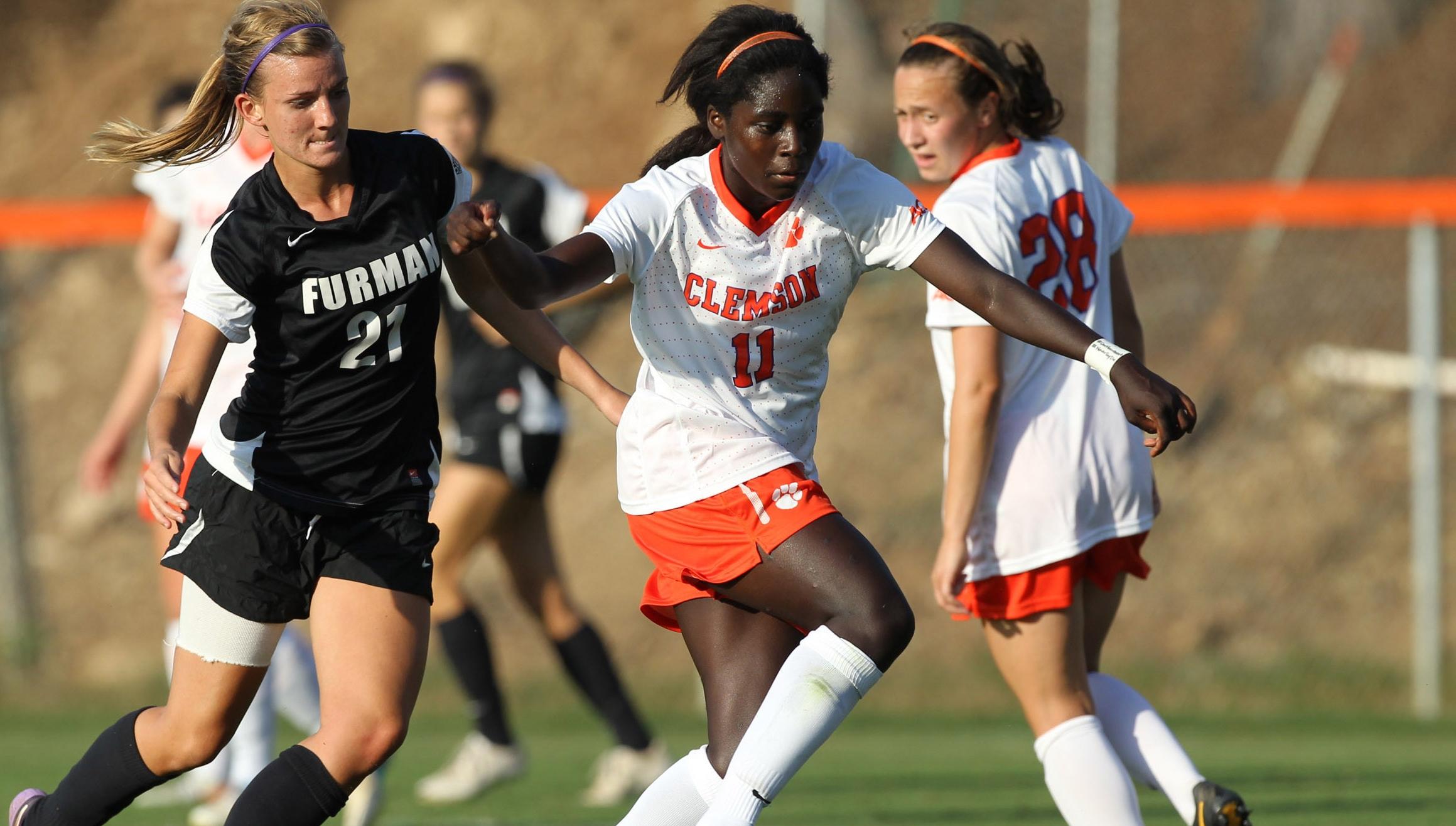 CLEMSON, SC – The Clemson women’s soccer team defeated Furman by a score of 1-0 on Sunday night at Historic Riggs Field.  Freshman Catrina Atanda scored the game’s lone goal, the first of her collegiate career, to give the Tigers the victory over the Paladins.  With the win, Clemson improves to 1-0-1 on the season while Furman falls to 0-1.

“We were tested by a good opponent tonight in Furman, and I was pleased to get the win,” said head coach Eddie Radwanski.  “We were fighting some nerves and a little bit of fatigue, but we were patient and played through it, and eventually were able to capitalize on one of our chances.  We do need to do a better job of finishing, but this was a challenging weekend, in that we had to deal with a quick turnaround and a tough opponent, and I’m happy with the result.  There is a lot of upside with this team, but, we are still a young team and we are going to have to continue to grow and learn together.”

Clemson seemed to be in control from the start of the game, outshooting the Paladins 12-2 in the first half.  Despite the offensive barrage, the game remained scoreless at halftime.

Freshman midfielder Catrina Atanda broke the tie at the 54:30 mark as she netted her first career goal as a Tiger.  After a long shot by freshman Tori Andreski deflected off the hands of the Furman keeper, Atanda got the rebound and sent the ball into the net from inside the box.  The goal proved to be enough, as the Tigers went on to win by the final score of 1-0.

“The key to the second half was that we came out pressing.  We remained confident and just kept taking shots and looking for opportunities,” said Atanda.  “It felt great to be able to score the game-winner, and I think it’s definitely going to help my confidence for future games.  With all of the improvements, Riggs feels like a new stadium, and it’s a great field to play on.  I couldn’t have asked for a better place to score my first goal.”

“It was an amazing feeling playing my first game at Riggs,” said Wagner.  “The crowd was unreal.  When we ran out of the locker room before the game, and to have such a big crowd with everyone cheering for us…it was just an unbelievable feeling.”

Kailen Sheridan was solid in net for the Tigers once again as she recorded three saves on the night.  The freshman has opened her Clemson career with back-to-back shutouts in her first two starts.

The Tigers will now travel to Tampa, FL to face South Florida on Friday, August 30 at 6:00 PM.  The team’s next home match will be Friday, September 6 when Clemson plays host to South Carolina at 5:30 PM.  That game will be broadcast live on ESPN3.