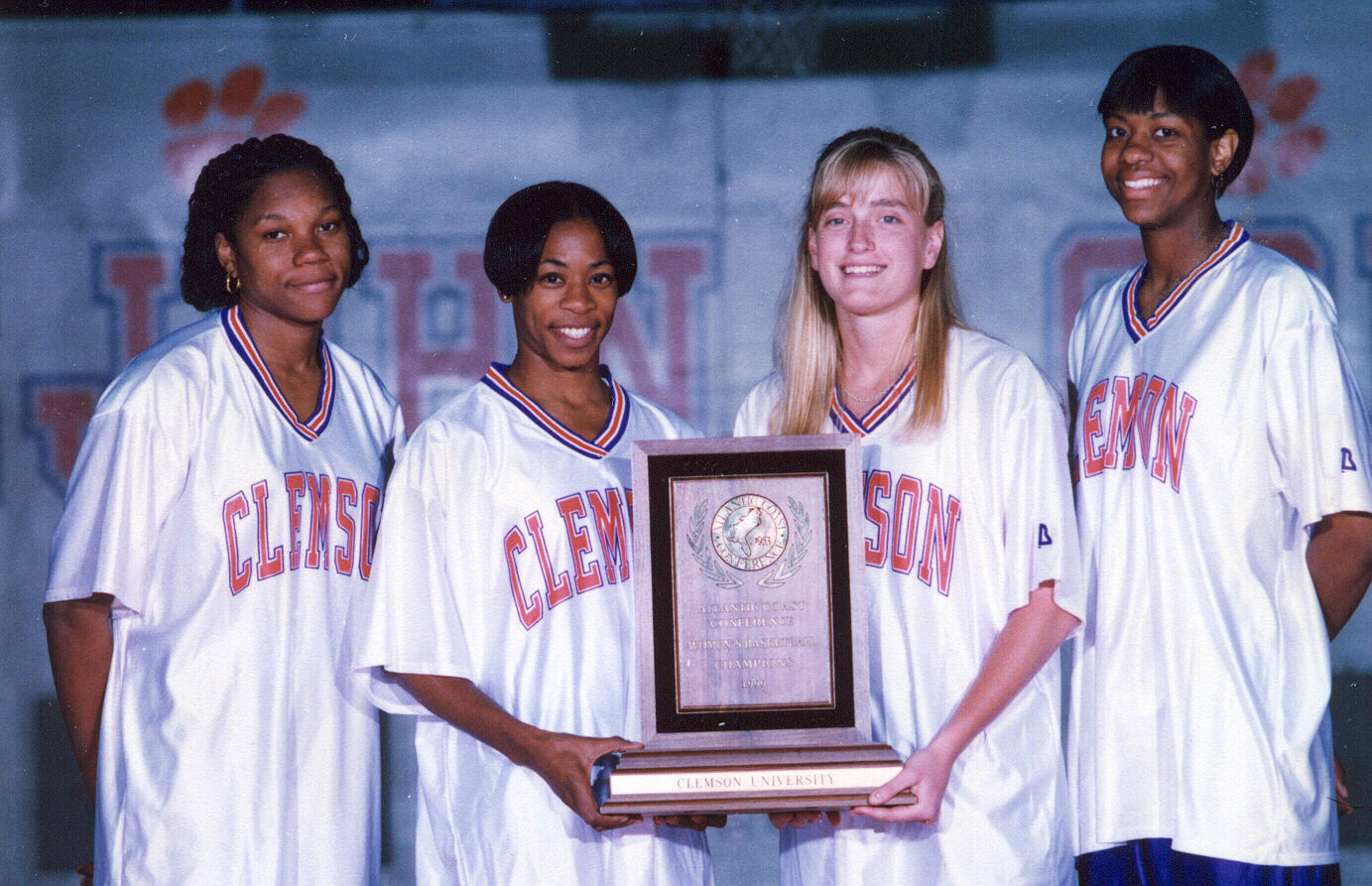 By Sam Blackman It’s hard to believe that it has been 15 years since the Clemson Lady Tiger basketball team won the 1999 ACC Tournament.   That 1999 squad could be labeled as the best Clemson has ever produced.  It would probably be the overwhelming choice by fans as well.  The team consisted of four seniors, Natasha Anderson, Nikki Blassingame, Amy Geren and Itoro Umoh.  These four players became household names to the Clemson faithful.        This senior class helped win the school’s very first ACC Championship their freshman year in 1996 and finished their career with another ACC Championship Trophy in 1999.     It’s no wonder that this group of seniors became the school’s winningest class in history with a record of 93-33 for a .738 pct.        The year started with a bang as the 1999 squad won the first 11 contests.  The team started the season unranked and appeared in the polls at the number-25 spot after winning the first four contests of the season.    Clemson won two ACC contests by defeating N.C. State and Maryland in the month of December.    After wins over Dartmouth and South Carolina, Clemson had an impressive win over Louisiana State in Myrtle Beach, SC on December 20.  Umoh’s driving layup with 3.1 seconds left gave Clemson the victory over the Tigers from Baton Rouge, LA.      After being ranked 14th during the middle of December, the win over LSU must have impressed the voters, as the Lady Tigers moved up to 10th in the polls.  Clemson lost two straight to Virginia and North Carolina, but the Lady Tigers rebounded with wins over Florida State and Georgia Tech.    Clemson lost to Duke in Durham, but reeled off four straight wins, including a victory over 14th-ranked Iowa State on January 24.  This win proved to be costly, as Erin Batth went down with a knee injury.  But she miraculously returned to the lineup five games later.        On January 17, Itoro Umoh had 12 points, 11 rebounds, and 10 assists in recording a triple-double en route to Clemson’s 78-38 win over Wake Forest.  This was only the fifth time a player in the history of the ACC had recorded a triple-double, the second time in Clemson history.     Clemson defeated Maryland and lost to Virginia on the road.  After a home loss to North Carolina, Clemson won four straight to finish the regular season with a 21-5 record.     On February 27, fourth-seeded Clemson defeated fifth-seeded N.C. State 52-51 in the quarterfinals of the ACC Tournament, in Independence Arena in Charlotte, NC.     This was the first quarterfinal game ever televised.  Batth went down with another injury that required six stitches in her chin.  It was questionable if she would play the next day, but she played in the Duke matchup in the semifinals.    Clemson defeated the eighth-ranked and top-seeded Blue Devils 76-71, in the semifinals.     On March 1, Clemson routed 11th-ranked North Carolina 87-72 in the finals.  Umoh was named the MVP of the tournament and the injured Batth played in the Championship game, probably the most courageous effort in Clemson women’s basketball history.  Clemson played host to the first two rounds of the NCAA Tournament.  The Lady Tigers were seeded second in the Mideast Regional, the highest seed in school history.     Clemson defeated Florida A&M in the first round 76-45.  The Lady Tigers advanced to the Final 16 with a 63-51 victory over Illinois.        This marked the fourth time that Clemson had advanced to the final 16 under head coach Jim Davis.     Eventual Final Four participant, Georgia defeated the Lady Tigers 67-54 in the semifinals of the Mideast region in Cincinnati, OH to end the season.         Clemson finished the season with a 26-6 record  and ranked 10th in the final Associated Press poll. The 26 wins are a school record for most victories in a single season.    Other accolades included the guard tandem of Itoro Umoh and Amy Geren being named first-team All-ACC.    Coach Jim Davis was named Coach of the Year and Itoro Umoh was named All-Region in the Women’s Basketball Coaches Association District II.        Clemson had three 1,000 point career scorers on the 1998-99 squad—Itoro Umoh (1,402), Amy Geren (1,402), and Natasha Anderson (1,033).     Geren led the team in scoring with a 13.5 ppg., and Nikki Blassingame led the team in rebounding with a 7.9 rpg.    Umoh led the team in assists (182) and steals (63).      Geren, known for her three-point shooting ability, won the National Three-Point Shooting Contest in the Spring of 1999.