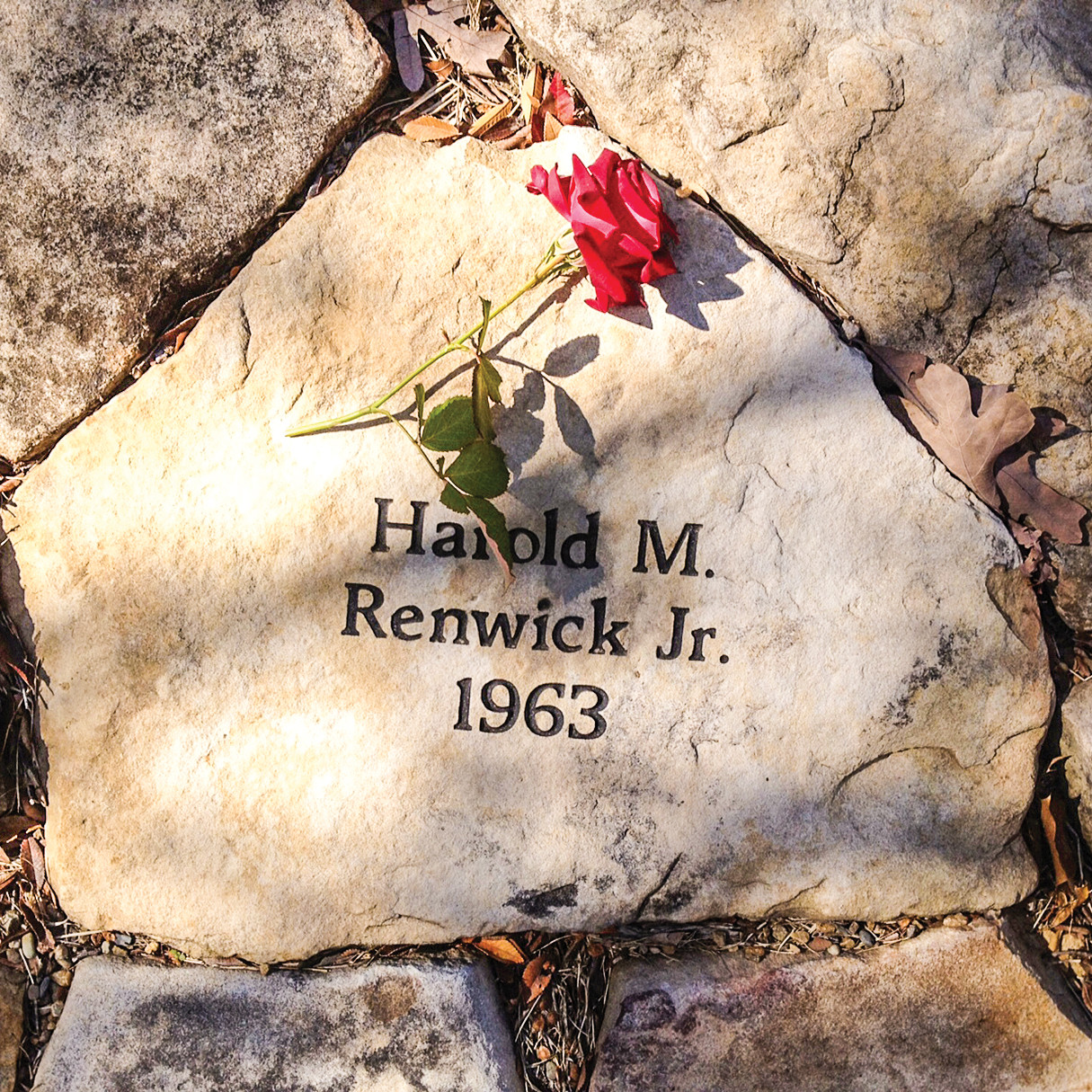 In the shadow of Clemson’s Death Valley, just across the street from fabled Howard’s Rock rests the Scroll of Honor Memorial. It honors all Clemson alumni who gave the ultimate sacrifice – their life – in the service of our country.

Stones have been placed along the base of the sculpted barrow of the memorial. A total of 485 of these stones are engraved with the names of our bravest Tigers. And on home football Saturdays in the fall, a tiny flower can be seen resting on the stone honoring a Vietnam War hero, Harold “Mac” Renwick Jr.

For the thousands of orange-clad Clemson fans who pass the Scroll of Honor on their way to Memorial Stadium each gameday, the little flower can easily be missed. It is placed without fanfare, an announcement or a ceremony. But for Renwick’s wife, Perry Anne, and daughter, Penny, placing a solemn blossom on the scroll symbolizes the love for a husband and father taken far too soon.

The story of the incredible man began in the rolling hills of the Palmetto State near the town of Winnsboro. Born June 3, 1941, Renwick grew up less than a mile away from the future love of his life, Perry Anne Cathcart.

“We had grown up going to church together and had always been good friends,” recalled Perry Anne. “I believe it wasn’t until our senior year of high school we began dating.

“Mac’s love of Clemson also began then. My daddy played football and baseball for Clemson as a cadet there in the 1930s. Once he completed his military service and moved back to Winnsboro, he would load up the family and take us to football games. When I started dating Mac, he got to come along, too.”

The journey from Winnsboro became one of destiny for the young Renwick. An incredible athlete, Renwick led Mount Zion Institute to back-to-back state football championships (1957,58) at quarterback and was a starter for the 1958 state champions on the hardwood.

Long set on joining the military, Renwick was also interested in becoming an engineer. Attending Clemson seemed to be the perfect fit.

Stepping onto campus in the fall of 1959, Renwick emerged as an engaged student and natural leader. A member of Phi Kappa Delta, Army ROTC and Scabbard and Blade, Renwick also played quarterback for Frank Howard’s teams from 1959-63. Walking onto the team as a freshman, the football savvy and determination of the Winnsboro native greatly impressed Howard, and he put Renwick on scholarship.

“I remember staying in his room each home game Friday night as the team was sequestered in Anderson at a hotel,” said his younger brother, Wayne. “Coach Howard even showed me how to turn on the practice field lights so ‘you young ones can play ball while we are away.’ Although his quarterback time was limited due to getting a finger cut off in a game, he never stopped trying to come back.”

Renwick’s sense of loyalty and dedication to Clemson and its football program would soon translate into stellar military service in the Army. Graduating from Clemson in 1963 with a degree in industrial management, Renwick married his long-time sweetheart on June 1 of that same year before being commissioned in the Army.

From Fort Jackson, to Fort Benning, to Germany, to Maryland, the young couple traveled from base to base for Renwick’s training. Along the way came a promotion to the rank of captain, as well as the birth of Penny, the couple’s only child and greatest joy.

With Penny’s birth also came the gripping reality that Renwick could soon face deployment in Vietnam, as the ongoing war there continued to rage through the jungles and mountains of the Asian country.

After moving to El Paso, Texas, where Renwick attended Vietnamese Language School, the Army notified the young family of three that he would be shipped over to Vietnam in November 1967. Wanting to head back home to South Carolina one last time before deployment, Renwick was able to share in the joy of taking his little girl to her first Tiger football game.

Stopping in Winnsboro, he asked his in-laws to take care of his family, and if anything should happen to him, they help raise the then one-year-old Penny.

A short time later, Renwick was on the front lines in Vietnam.

Captain Renwick served as part of Advisory Team 45 of MACV (Military Assistance Command, Vietnam). MACV teams battled on their own as small groups of Americans, often in remote areas, supported only by Vietnamese forces whose capabilities and loyalty were sometimes suspect. Under Renwick’s leadership as Senior Advisor to the 65th Regional Forces Battalion, the Clemson alum led men against hostile forces in the Quang Ngai Province in South Vietnam.

On Feb. 27, 1968, Renwick was leading a search-and-destroy operation when enemy gunfire and mortar attacks erupted. Jumping to action, Renwick and another American advisor moved forward to lead the men. Joining the lead unit, Renwick discovered they had become pinned down by hostile fire and were taking heavy casualties.

Fearlessly, he directed a valiant counterattack, leading the unit forward to combat the enemy positions. In charging the communist forces, he sustained a wound that would take his life that day. Inspired by Renwick’s bravery, the U.S. Army forces continued battling by attacking the enemy fortifications.

At his funeral back home in Winnsboro, Howard journeyed down from Clemson, paying his respects to Renwick as one of the honorary escorts for a man who never stopped serving Clemson, the football program or his country.

Although February will mark 47 years since Renwick’s passing, this true Clemson and American hero lives on through his family and the legacy he left behind. Renwick remains the last Tiger football player to be killed in the line of duty.

Presented since 1975, the Renwick-Flanders Award is named for Captain Renwick and his Winnsboro teammate, First Lieutenant Leon Darvin Flanders. Both men played on the gridiron for the Tigers and both gave the ultimate sacrifice in service to our country. An endowed ROTC scholarship is awarded to a Clemson student each year in honor of Renwick and two other Winnsboro natives lost in Vietnam.

Renwick’s wife is 75 years old now and still lives in Winnsboro, as does his daughter. Together, they still have football season tickets and travel to Clemson to cheer on the Tigers and remember the man they loved so much.

“Not a day goes by when I don’t think of him,” said Penny. “Freedom is not free and we must have people willing to step up and do what most will not. My daddy did exactly that, and I will always be proud of him. I never knew my father and many details about his life I have yet to discover, but I can imagine the kind of man he was.”

Penny was just 22 months old when her father was killed, and today she has no recollection of the man. Shortly before Renwick’s passing, he penned a poem (right) titled, “Now You Are Two,” as a gift to his baby girl, intending to send it to her on her second birthday. After his death, an Army officer found the letter and sent it to the family. It’s something Penny holds onto this very day.

It starts, “A poem for my daughter, I send it to you, on this your birthday, when you become two.”…

“NOW YOU ARE TWO”Rejoice and be happy this fine day,Have fun in all the games you play.Run, sing, be happy and gay,For you are two, my daughter, today.Of all the wonderful days of the year,Today especially I wish I could be near.To hold you, to hug you and share your world,Of being a year older and being a girl.But alas, my child, with you I cannot be,Because there is a need to keep the world free.A need that was created many years ago,When a people’s thirst for freedom began to grow.You do not know these people, they are strangers to us,And you may ask, “Daddy, why all the fuss?”For a people who live in a land far away?Daddy, why can’t you be with me on my birthday?”As you grow older, my child, you will learn,That in men’s hearts a spark will burn.A spark so intense that it cannot be denied,So strong it is that men have died.Fighting for what they believe is true,Fighting for freedom the way all men do.We have watched enough television to know,That in this world bad people will go.And try to hurt and harm the good guys.Cheat, steal and tell all kind of lies.These are some of the things these bad guys do,This is the reason that your daddy flew.Across the oceans to a land far away,To help other daddies with their children to play.To help these daddies see this struggle through,So they can say, “Happy Birthday, my daughter, now you are two.”Don’t weep, my child, for this birthday I’ll miss,Go to your mommy and she’ll give you a kiss.From me, to remind you I’ve not forgot,You see, my child, I do love you a lot.So much, in fact, that to you I do pledge,That a world of freedom shall be your heritage.Sleep, my child, the night is here,Sleep, my child, and wake without fear.Grow, my child, be happy and be free,For these are the dreams I have for thee.