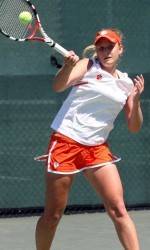 CLEMSON, SC – Clemson and Georgia battled each other and temperatures in the nineties for almost four hours for the right to advance to the Sweet 16. In the end, Laurianne Henry’s win at flight five singles clinched the 4-2 decision for the #9 Tigers (24-5) on Saturday in Clemson to propel the Tigers to Athens for the third round.

Clemson closed its home schedule a school-record tying 13-1, and downed their eighth top-25 opponent of the season, as Georgia (13-9) came in ranked 19th. Clemson will now play in the Sweet 16 for the fourth consecutive season, and the sixth time in the last seven years.

“They really fought hard from the very beginning,” said Nancy Harris. “The mountain was straight up and they took it one step at a time, and that’s what they’ve done the entire year. They did it all, and this was one of the great epic matches in Clemson. They’re a big school, big name, big coach. That was probably the toughest opponents we’ve ever had here.”

This season’s NCAA Championships are hosted by the University of Georgia, which made it that much more important to knock off the Bulldogs. It was the second time Clemson defeated Georgia this season, as the Tigers won at then-#4 Georgia, 4-3, to move to 7-0 on the season.

“Obviously it was a really close match today and we battled,” said Georgia Head Coach Jeff Wallace. “It was good to get the doubles point and get that momentum, but Clemson took over in singles and won the first sets on courts one through four. I think we were up in some sets that we didn’t close out, and when you’re in the NCAA Round of 32 you need to close out sets.”

With as competitive as the first match was in February, with Clemson rallying from a 3-1 deficit to win, it was no surprise that Saturday’s match kept with the theme.

The top doubles group feature two of the top ten doubles teams in the nation, in #7 Ina Hadziselimovic and Georgia 8th-ranked group of Chelsey Gullickson and Nadja Gilchrist. Neither tandem budged on their serve in the first nine games, as Georgia held a 5-4 edge.

The Bulldogs broke to take a 6-4 lead before Clemson came back to knot the score at six after breaking back and holding. The Bulldogs took a 7-6 lead, but Clemson again responded to knot it at seven-apiece.

Meanwhile, at court two, Laurianne Henry’s found themselves trailing 7-5, with Georgia leading 40-15 with the serve. Clemson fought of consecutive match points, and we able to climb back to 7-6. Wong and Henry then took the next two games to take an 8-7 lead.

On court one, Clemson led 40-0 at 7-8, but were unable to force a tiebreak, as Georgia came all the way back to hold on for the 9-7 victory.

Court two did not finish, as Clemson led 30-0, and serving for the match.

For Bek and Hadziselimovic, it broke a 12-match winning streak, which began on March 7. However, the two have already earned a top-eight seed in the NCAA Doubles Championship, as have Gullickson and Gilchrist. Both duos showed the high level of tennis that it will take to win the national championship, and each is a strong contender for the title.

In singles, the strength of the lineup this year has been the depth, and with wins at places two, three, four, and five, today was no different.

Hadziselimovic knotted the match at one-apiece with a 6-1, 6-3 singles win against Yvette Hyndman. The win was her 26th on the season and 88th of her career, moving her into tenth in Clemson history in singles wins. It was her second win of the year over Hyndman.

Georgia took a 2-1 lead as Lara Fakhoury took down Magnusson at flight six, 6-3, 6-3. However, fellow freshman Nelly Ciolkowski responded with a close, 6-4, 6-3 win of her own at flight four over Naoko Ueshima. Ciolkowski is now 29-7 on the season. The Tigers improved to 21-0 when Ciolkowski wins her singles match.

Meanwhile at flight five, Henry was in a battle of her won. Earlier this season, it was Henry who clinched the match for Clemson down in Georgia, and she wanted to make the same mark this match.

After dropping the first set 6-4 to Cameron Ellis, Henry fought off exhaustion and cramping to take the second set in a tiebreaker, 7-2. Henry then stepped on the gas in the final set, posting a 6-2 set win and walking confidently to the net to shake hands after Ellis’ shot hit the net for the match-clinching point.

Bek and Gullickson had just started a third set when play was stopped.

Clemson advances to the Sweet 16 in Athens, GA on May 20.