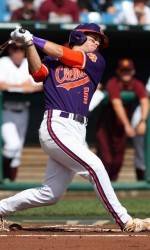 South Carolina edged rival Clemson 4-3 in a tight see-saw affair on Saturday night in the College World Series at Rosenblatt Stadium, earning the right to face UCLA in the championship series beginning Monday.

A combination of solid pitching and timely hitting proved to be the difference for the Gamecocks. South Carolina starter Sam Dyson tossed 6.2 innings, allowing a pair of earned runs on five hits, while reliever Matt Price (4-1) pitched 2.1 innings and gave up one earned run on three hits to pick up the win.

Offensively, first-baseman Christian Walker paced the Gamecocks by going 2-for-4 with a pair of RBIs. Centerfielder Jackie Bradley, Jr. extended his hitting streak to 21 games with a 1-for-2, one-run performance, while Evan Marzilli crossed the plate twice on the day.

South Carolina opened the first inning with three consecutive hits to load the bases but managed just one run thanks in part to a Tiger double play. Marzilli laced a single up the middle to begin the game and eventually scored on Walker’s double-play grounder. Tiger starter Casey Harman (8-4) fanned the final batter to end the inning.

Clemson tied the score in the third inning when Will Lamb was hit-by-pitch, then darted home on Jeff Schaus’ groundout to second.

Walker redeemed himself in the fourth, slugging a solo home run over the left-field wall to put the Gamecocks back on top 2-1. It marked Walker’s ninth home run of the season.

The back-and-forth contest continued in the seventh, as the Tigers tied the score again at 2-2. A one-out walk to pinch-hitter Chris Epps sparked the rally, then Lamb put Epps in scoring position with a bloop single to right-center. A grounder to short gave the Gamecocks a chance to get out of the inning unscathed, but the second-baseman overthrew first in an attempt to turn a double play and Epps charged home for the tying run.

The Gamecocks would take the lead for good with a pair of runs in the seventh, capitalizing on a Clemson miscue and an intentional walk. Harman, who suffered the loss, hit Marzilli with a pitch before exiting in favor of Alex Frederick. Frederick fanned the next batter for the second out, but Marzilli stole second on the pitch and reached third when the throw from the catcher sailed into centerfield. After Bradley was intentionally walked, Walker and Adrian Morales hit back-to-back, RBI singles for the 4-2 lead. A walk to pinch-hitter Brady Thomas loaded the bases and catcher Kyle Enders sent a deep fly to right-center, but Clemson centerfielder Wilson Boyd made an impressive catch on the warning track to help the Tigers escape any further damage.

Clemson inched back in the eighth thanks to John Hinson’s leadoff triple. Hinson chugged his way to third after South Carolina’s center and right-fielder collided, allowing the ball to drop. Brad Miller grounded to second, plating Hinson, which pulled the Tigers within a run 4-3.

Although the Tigers mustered a two-out hit in the final frame, Price induced a grounder to first to end Clemson’s season with a 45-25 overall record.