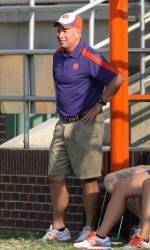 CLEMSON, SC – Stephanie Wirth scored two goals and Kristen Mewis had two assists in leading fifth-ranked Boston College to a 4-0 victory over Clemson in a women’s Atlantic Coast Conference soccer match at Clemson, SC Sunday afternoon. With the win, Boston College is now 9-0-2 overall and 4-0 in the ACC. Clemson falls to 5-7 overall and 0-5 in league play.

In the 36th minute, Clemson had a goal nullified. The Tigers’ Rachel Hurd had a shot from eight yards out but the Boston College goalkeeper Jillian Mastroianni could not control the save. Hurd’s follow-up shot was knocked out of Mastroianni’s hands on the ground and went into the goal, but Hurd was called for a foul and her goal was not allowed.

Boston College scored first in the 37th minute. Mewis sent a corner kick in the box. Zoe Lombard headed the ball forward, and Wirth was there to head it in the goal from two yards out.

The Eagles struck again with one minute remaining in the first half. Alaina Beyar sent a though ball to Stephanie McCaffrey creating a one on one situation with the Clemson goalkeeper Morgan Hert. McCaffrey fired a shot into the netting from 16 yards out for her third goal of the season.

Boston College scored two goals midway in the second half. In the 61st minute, Victoria DiMartino crossed the ball from the left into the box. Rachel Davitt slid into the ball and sent an eight-yard shot into the goal. This was Davitt’s second goal of the season.

Boston College scored its fourth goal at the 70:23 mark. Mewis sent a through ball to Wirth creating a one-on-one situation with Clemson’s goalkeeper Hert. Wirth fired a shot from 12 yards out near the right post for her second goal of the game and on the year.

“I was pleased in the way we played,” said Clemson Head Coach Eddie Radwanski. “I thought we matched up well with them. We started the game well, and did not concede any early goals. There was good effort for the first 35 minutes. We competed well against a good team.

“I think the backline has had a great weekend,” continued Radwanski. “In the last two games, they have defended well, have been organized and have made good decisions. We have gained confidence and we are starting to play with more confidence in the back.”

Clemson will play at ninth-ranked North Carolina on Thursday in Chapel Hill, NC in the Tigers’ next action.